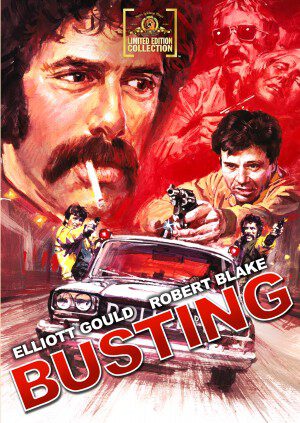 Back in the early days of cable, movies were rerun endlessly so if you liked one, you could burn their frames onto your retinas and it became a part of yourself. As a result, I’ve always had a soft spot in my heart for 1974’s Busting. You sit there, scratching your head, and can’t recall the film and there’s no shame in that.

Written and directed by Peter Hyams (The Star Chamber, Outland), it is a buddy cop film before that became in vogue and is very much from the era. It has a nice grainy film stock, makes the cops and the thugs slovenly and a visual shambles. While most of Hyams’ peers set their gritty tales of big city corruption and the only honest cops’ efforts to bring down the kingpin of crime in New York City, Hyams set his in Los Angeles, although you’d be hard-pressed to tell. This is a totally urban LA, one without starlets or the Hollywood sign glimpsed in the distance. It’s a grimy city of pimps, pushers, hookers, strippers, and a few good men.

The men happen to be Elliot Gould and Robert Blake, a year before he became a big star on Baretta. They are companionable detectives, taking no guff from anyone and with a casual attitude, begin working their way to Rizzo (Alan Garfield), the man effectively running the city. Their superior tries to protect them but has given up, throwing his hands into the air, and warning the guys to stay away from the criminal. This is clearly Gould’s film as more is revealed about him and his life than Blake, but they are watching one another’s backs from gay bars to strip clubs.

I’m not giving anything away by saying they get their man, but the lessons the detectives learn along the way, and the harsh reality Rizzo reveals in the final scene gives the film an edge and poignancy missing from many of its contemporaries. Hyams’ script is sharp in subtle ways. As a director, he has some impressive tracking shots notably during the set piece, set inside a sprawling farmer’s market as the detectives hunt down three gun-wielding thugs.

The film received good notices when it first came out, with The New York Times noting Hyams “brings off something of a feat by making a contemporary cop film that is tough without exploiting the sort of right-wing cynicism that tells us all to go out and buy our own guns.” It clearly made an impact on me but it also heavily influenced Aaron Spelling, who more or less ripped off entire sequences frame by frame for his television series Starsky & Hutch. If you want a stronger version with some fun performances and more than a few comics references, Busting is finally available from MGM’s direct-to-disc Limited Edition Collection.