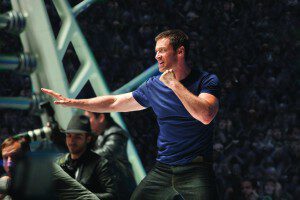 Hugh Jackman stars in Real Steel, out on home video this week, and the native Australian is best known to ComicMix fans for his work as Wolverine in  X-Men, X2 and X-Men: The Last Stand before spinning off into X-Men Origins: Wolverine and cameoing as the canucklehead in X-Men First Class.

In the fall of 2009, Jackman made a return to Broadway in the Keith Huff-penned A Steady Rain.

On February 22, 2009, Jackman took on the prestigious role of hosting the 81st Annual Academy Awards live from the Kodak Theater, he wowed those in attendance and helped ABC score a 13% increase in viewership from the previous year. Previously, Jackman served as host of the Tony Awards three years in a row, from 2003-2005, earning an Emmy Award for his 2004 duties at the 58th annual ceremony and a nomination for his 2005 appearance at the 59th annual ceremony.

In 2008, Jackman was seen in Twentieth Century Fox’s Deception opposite Ewan McGregor and the romantic action-adventure epic Australia, directed by Baz Luhrmann.

Jackman has also starred in Darren Aronofsky’s The Fountain, Christopher Nolan’s The Prestige and Woody Allen’s Scoop. He has lent his voice to the animated features Happy Feet and Flushed Away. Other films in which he has had leading roles include Someone Like You, Swordfish, Van Helsing and Kate and Leopold, for which he received a 2002 Golden Globe nomination.

For his portrayal of the 1970s singer-songwriter Peter Allen in The Boy From Oz, Jackman received the 2004 Tony Award® for Best Actor in a musical as well as Drama Desk, Drama League, Outer Critics Circle and Theatre World awards.

Previous theater credits include Carousel at Carnegie Hall, Oklahoma! at the National Theater in London (Olivier Award nomination), “Sunset Boulevard” (for which he won a Mo Award, Australia’s Tony Award) and Disney’s Beauty and the Beast (Mo Award nomination). 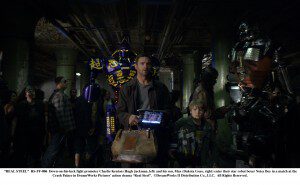 Q:        Your character, Charlie, has a tough relationship with his son, Max. Being a dad yourself, was that hard to play?

A:         After a few days of shooting, Shawn [Levy] pulled Dakota and me aside. He said, “Look, Dakota, you’re obviously a very well brought up, polite kid.  And Hugh, you like children. Both of you need to stop it immediately.” After that, there were several times after Shawn called, “Cut!” that I’d see Dakota look over at his mom like he was going to get in trouble. It was kind of like, “They told me to say this, mom, so it’s okay.” It obviously went against the grain for him to talk to me the way he did.

Having said that, I do have two children and there are times when you want to say things that you’re not allowed to say. It was nice to be able to let it rip for three months. It was good therapy.

A:         Yes, they love the movie. It’s the first one of my movies they’ve seen. If you think about it, there hasn’t been anything else that’s really appropriate for them, apart from a couple of animated movies I’ve done. They can’t wait to see it again. They really got into the story of the robots. They were cheering for them and I saw both of them getting a tear in their eye. My mother-in-law was at the same screening and she was crying too.

A:         I’d love to have a robot at home. I tried to smuggle one off the set, but it was difficult. They’re very heavy and hard to put in the trunk of the car. 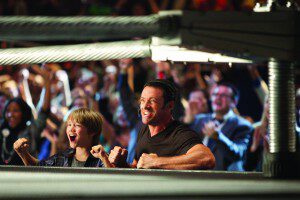 A:         Not really. It’s icing on the cake when they can watch it and love it. My kids are not that interested in my movie career, by the way. My son in particular just wants to be with his dad and never talks about it. It was great to sit and watch “Real Steel” with all three generations and see them love the movie.

A:         My character, Charlie, is impulsive, but I’m not like that. As my wife says, I’m a Libra and I’m just an even-Steven. I don’t really understand the lure of gambling. I don’t understand working hard for your money and then just giving it away. That’s just not my personality. Even when I was younger, if I’d go out with my mates and we’d go drinking, I’d be four or five drinks in and say, “Time to stop. Diminishing returns.”  All of my mates would say, “Come on!” but I just never really had it in me, which I’m actually kind of grateful for. Ironically, my wife is just like Charlie.

A:         If you ask my wife, my biggest flaw is my inability around the house. She likes to say that the only thing handy about me is that I’m close by. I also have a terrible memory and I’m bad at saying no. I often double book.

A:         I really thought I was going to have to do a lot more with Dakota, but Shawn is a master of directing younger actors. He’s done it before and he has four kids himself. He really mentored Dakota, and there were things that I did, too, from the very beginning. I wanted to give him the feeling, very quickly, of, “Hey, this is your set as much as it is mine and we’re in this together. There’s no delineation of power here. We’re all actors.” Dakota caught onto that. I kept telling him that he was doing everything right and I always asked him what he thought of a scene when we were done shooting it.  We also did quite a bit of improvisation, even if it was a bad idea, and Shawn would encourage him too. It kind of gave him the feeling that he wasn’t “the kid” on set.

The other thing was that Shawn and I really played with Dakota. We didn’t want him to feel an adult/child vibe because that’s not the dynamic in the movie. I would play practical jokes on him all the time and we just knocked around. We hung out on weekends.

A:         I always learn from child actors. They’re a great reminder of the simplicity of acting. As you get older, you can sometimes complicate things a little more. You can become too aware and start to think, “This is the scene emotionally and this is what I have to do. Okay, we’ve got the climax coming up….” You can start to analyze it too much. Kids are happy just to be and to listen. They have a real natural ability just to listen. Dakota is a very natural actor. It was easy to be in scenes with him.

Q:        This is the second time you’ve worked with Kevin Durand, correct?

A:         Yes. We were both on Broadway at about the same time and we met there. We’re kind of kindred spirits and he’s a great friend. I think he’s one of the most underrated, talented actors in Hollywood. People haven’t even begun to see the extent of what he can do. He took a character in “Real Steel” that could have been kind of uninteresting and made it very memorable. I’m happy to be in any movie with him. 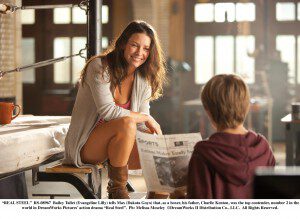 Q:        Is it in your contract that you have to take your shirt off in every film?

A:         It’s funny, because when I started filming Real Steel everyone was asking me if it was in my contract to take off my shirt and it really took me aback. I told Shawn I didn’t want to do it and he agreed. He said, “This movie isn’t going to be about that,” and then we never thought about it again. But there’s a scene in the script where Charlie changes his shirt in the boxing ring and he does it because all of his clothes are in his bag and he’s living out of his truck. He has no bedroom, no house, no anything. We thought that was a great story point, so it turned out that I had to take my shirt off.

A:         I was already doing a movie called Sumo with Lee Daniels and had put on a lot of weight for that. Then it got canceled about three months before we started Real Steel, so I was big, I was overweight. I called Shawn up and said, “My weight is going to work for this film, too, right? I’m playing an ex-boxer and you need to believe that he could have been in the ring.” Shawn said, “That’s a brilliant idea. In that first scene, when you fall out of bed, you’ll have a paunch and it will immediately signal to people that you’re not Wolverine. I love it. It’s going to be perfect.”

I came in for the fitting a month before the film started and I was twenty pounds heavier than I ended up being in the movie. It’s not easy for me to be that way, but I was eating a lot and pushing a lot of weight. Low reps, heavy weights. I hadn’t told the costumer that I was coming in heavier, so it was literally like I was putting on my son’s clothing. I could barely put the jeans on. I remember Shawn saying, “This is just too much. Let’s pull back on the realism.”

Q:        Is there a difference in your approach to theater and film work?

A:         Not really. As an actor, you have many tools—your body, your voice, your emotions, your mentality. If you’re performing in front of twenty-five hundred people, you need to get to the person in the back. There’s a mental process to that. On film, you’re going to make everything quieter. Your eyes are very important because they communicate your thought process. In fact, in film, what you don’t say is more important than what you do say. That’s not so much the case onstage. I’m forever grateful that I did theater first. I think it’s much easier to distill the technique from theater than to say, “Oh, let’s just add water to film.” There are definitely muscles that you need on the stage that you don’t develop in film.

Having said that, if you haven’t done your work as an actor and you don’t know what’s going on internally for the character you’re playing onstage, particularly if it’s a musical, and there’s no real thought behind the song, no one will feel anything.