Bone: The Quest for the Spark Continues in Volume Two 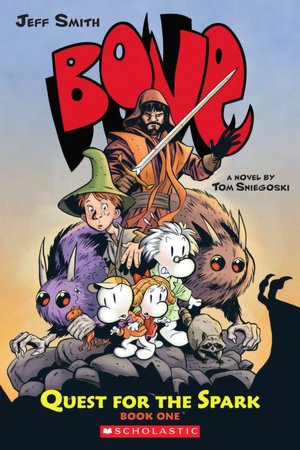 Since the color editions of Bone began appearing nearly a decade ago, Jeff Smith’s delightful series has become synonymous with Scholastic’s Graphix imprint. In 2009, Scholastic concluded a deal that allows them to publish expansion material set in the Bone universe such as the Tall Tales collection that came out a while back.

Last year, a new series, Quest for the Spark, began but what made this unique was that these books would be illustrated prose works. Tom Sniegoski, who collaborated on Tall Tales, has been penning the stories while Smith (with colorist Steve Hamaker) has provided the covers and spot illustrations. Volume two is due out momentarily with volume three coming this summer.

When this was first announced, Smith noted on his website, “I was a bit unsure about this project when Tom first suggested it, but when I read the first book I laughed so hard, I agreed to do it. Scholastic was so blown away by it, that they decided to make it available in hardcover and wanted the illustrations, of which I think I’m going to do about twenty, full bleed and in color.”

The reality is the second book as 12 full page pieces along with spot art but it’s all nicely spaced out. So, what are the books about? Well, first of all, these are considered Bone: Legacy even though you the reader will call them Quest for the Spark. They include characters from the original series including the Two Stupid Rat Creatures and Roderick the Raccoon, Master of the Eastern Border, Thorn Harvestar, and Rose (Gran’ma Ben) Harvestar.  While mentioned, the Bone cousins will not be seen nor are active participants.

The hero of the story is Tom Elm, your basically turnip farmer who lives in the Valley. But, when the village is overwhelmed with nightmares, caused by an evil called The Nacht, he feels this is his chance to fulfill his destiny for greatness. He gathers an assortment of allies and sallies forth to protect The Spark – found in the core of The Nacht. Basically, The Nacht has been sending nightmares through the Dreaming to the Waking World and desires for all living beings to succumb but Tom stands in his way. Already asleep by the end of Book One are Queen Thorn and Gran’ma Ben so Tom, Roderick the raccoon, Lorimar, who can shapeshift, a Veni Yan warrior; and two stupid rat creatures have to save the day.

Of course, the fun is the getting there and Sniegoski successfully captures Smith’s sense of adventurous whimsy. Book one pits them against a trio of bears with plans of their own which leads them to a dangerous beehive. Book two reveals there’s a traitor in the bunch so complications get compounded as happens in any good yarn.

It’s interesting to note how Smith himself views the trilogy, “While not an official sequel to my comic, it will be fun to see some the characters again, like the stupid rat creatures, and Roderick the raccoon. “

Since Scholastic obtained the license, they have sold over 4.5 million Bone books, propelling the series to most recommended graphic novels for students lists. The 1500-page original story was named by Time as one of the top ten graphic novels of all time.

The trilogy is available in hardcover and softcover.