MICHAEL DAVIS: Shock To My System 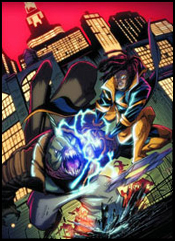 I’ve spent the last few months praising the DC New 52 in one form or another. Months before the books came out, I was debating those who thought the reboot was anything from a simply bad idea to the end of the world, as we know it.

I defended the idea then and in fact over the last three weeks right here on ComicMix. I’ve supported the idea and got into a heated battle with Marc Alan Fishman over the new 52.

Everything about the New 52 is horrible.

I’m going to take a random decision made by DC, a totally arbitrary completely chance judgment they have made to make my point that the entire New 52 is the worst thing to happen to comics since Fredric Wertham and the Spirit movie.

Now. What completely indiscriminate, unplanned, hit or miss just off the top of my head move has DC made with the New 52 that has made me see the light of their atrocious affront to the entire comics, nay, the entire entertainment industry!

Let’s see, lets see, what needle can I grab in a haystack of bad moves?

Full disclosure: I co-created Static Shock and wrote the original Milestone bible and named all the characters after my family but that has nothing whatsoever to do with my deciding to use Static Shock as an example as to why I changed my mind about the DC 52. My history with the character is beside the point.

No, I did not like the new Static Shock book after John Rozum left and no, I did not say I didn’t like it before DC cancelled the book for fear that the opinion of one of the creators would affect the sales but that’s besides the point.

The point is DC cancelled Static Shock and that’s just one of the reasons I was wrong about the New 52.

That’s beside the point.

Why not cancel the Justice League? So what if the book is selling in the hundreds of thousands? I don’t like it anymore! The fact that I liked it (loved it) before they canceled Static Shock is beside the point.

There that is my unbiased and completely unprejudiced reasoning behind my change of heart regarding the DC New 52.

You were right, Marc. What was I thinking? Happy Birthday again Kathy, you are married to a very wise man.