Hancock Tips His Hat to SUN KOH: HEIR OF ATLANTIS VOLUME ONE! 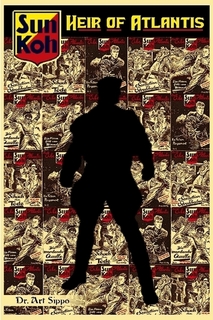 Although many of us who write and publish New Pulp sincerely and honestly feel we are producing work that needs to be read, stories that people will love to read, and books that bring life back to a genre/arena/style that so many have forgotten or never even knew, it is truly rare that a single book not only does all of that from one cover to another, but does it with such style and finesse that it could simultaneously fit right into the literature of the era which inspired it and stand on its own as a modern novel, cognizant of all the sensibilities and nuances that that would require.

Rare, but not impossible.  How do I know this, you may ask?  Because I’m holding an example of such a feat in my hand right now.  Yup.  Written by the ever fascinating Dr. Art Sippo, whose Pulp Adventures I still hope to write someday, the book in question is SUN KOH: HEIR OF ATLANTS, VOLUME 1!

Sun Koh, a character from the German Pulps of the early 20th Century, is often referred to as Germany’s answer to Doc Savage.   This is most definitely true, as answered by Sippo in his fantastic introduction to this volume, but the author also works wonders with a character that many claim to find abhorrent and reprehensible.   This agitated feeling toward a literary character comes from the fact that with the change of political climate in Germany in the 1930s and 40s, Sun Koh was used basically to further the ideological views of Hitler and his Nazi Party.   What Sippo does with this situation instead of shying away from it in any form or fashion is essentially reboots Sun Koh keeping his Atlantaean heritage intact as well as his rather limited views of politics, women, and humanity in general.

That is what Sippo does to kick off his volume.  What he does by the end of HEIR OF ATLANTIS is the truly wonderful part of this book.  Through a natural organic process, Sippo builds up Koh as a hero, not so much loyal to Germany, but loyal to his heritage and seeking his true place as Prince of all he surveys.   His time in the modern world (the 1930s) and his interaction with people who become his team of associates, however, changes Sun Koh’s view on several subjects and actually works on the character to bring out questions.  Questions of his own morality, questions of what Hitler’s plans and goals, and most importantly questions about what is truly important to Sun Koh as the hero of the tale.   Like no other writer I’ve ever read, Art Sippo takes a character from being essentially a lifeless automaton with tyrannical tendencies to being a real person, an individual who has an evolving innate sense of right and wrong and is learning, by the end of the book, to follow that compass.

Add into that compelling story lines, exciting and interesting supporting characters that could carry (and did in their original incarnations) stories all their own, and a fantastic pacing and attention to plot, and you have Art Sippo’s SUN KOH: HEIR OF ATLANTIS, VOLUME 1.  You also have one of the best books I’ve ever read, period.

FIVE OUT OF FIVE TIPS OF THE HAT-Truly deserving of every accolade it has, does, and will receive.