Katie McGrath Discusses the Joys of Wickedness as Merlin’s Morgana 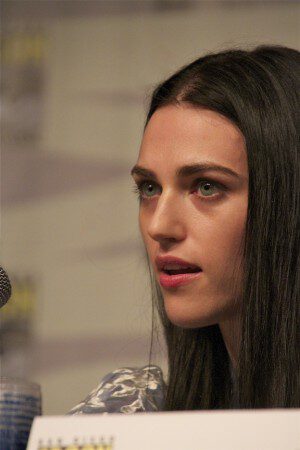 To put a new spin on an old phrase, hell hath no fury like a sorceress scorned.

So goes the tale of MERLIN, the international hit series that begins its fourth season on Syfy next Friday, January 6 with the first of a two-part episode that finds Morgana’s blinkered determination threatening not only Arthur’s future, but the very balance of the world. With her magic stronger than ever, the sorceress summons the mighty Callieach to tear open the veil between the worlds. Hellish creatures pour forth, killing any who succumb to their touch. With King Uther a shadow of his former self, it falls to Merlin, Arthur and his loyal Knights to protect the kingdom.

Katie McGrath has spent four years evolving the character of Morgana, once the beloved ward to the king who discovers she is actually his daughter. That secret is revealed to her through her half-sister, the wicked Morgause, who guides Morgana down a path of dark magic, opening her eyes to the true power of her evil. Morgana now has a clear focus: to return to Camelot as its rightful ruler, and bring down her wrath upon all she believes have wronged her.

McGrath has eschewed vacation time away from the MERLIN set in lieu of additional work in productions as varied as W.E., the Madonna-directed drama about the affair between King Edward VIII and Wallis Simpson; A Princess for Christmas, a 2011 Hallmark Channel holiday enchanter starring McGrath opposite Sir Roger Moore; and the upcoming Labyrinth, a medieval tale from Ridley Scott that centers around the Holy Grail.

Before taking a winter holiday, though, McGrath spent some time chatting about the new season of MERLIN, the virtues of playing evil, “Jitterbug Perfume,” the recurring medieval themes in her professional life, The West Wing, Louis XIV, and Florence and the Machine. The Lady Morgana speaks … read on.

QUESTION: The fourth season of MERLIN continues down a darker, more dramatic path. Do you feel the show is following a natural evolution?

KATIE MCGRATH: The guys (co-creators Johnny Capps and Julian Murphy) have found a formula that works, and they’ve taken it to the next level with the fourth season. This is clearly their most ambitious. In four seasons, the characters have changed and grown, and the audience has grown with them. MERLIN still has all the great comedy and relationships that the audiences adore, but we’ve gotten more sinister and the show has gotten there in a very organic way. That was the path that was destined for us. Plus the show has gotten more filmic – it’s bigger in many ways than when we started, visually and in the storytelling. So our episodes are now more like 14 little cinematic films.

QUESTION: Morgana is having dreams in Season Four that include visions of her future … as well as an aged, bearded Merlin. How does this affect her perspective of what she’s doing?

MCGRATH: I think it breathes a fear in her of this character. Morgana doesn’t know that this vision is actually Merlin – she only knows the name Emrys and that he’s a very powerful person.  Before the visions, Morgana didn’t believe she had anything to worry about, because she is so powerful herself. But these visions breed a fear and mistrust in her because she can’t fight what she doesn’t know. So her fear and paranoia of Emrys becomes a major part of the fourth season.

QUESTION: Has Morgana’s appearance also made the transition to evil?

MCGRATH: Morgana now kind of looks like a Goth Jessica Rabbit. She’s the character that really changes the most in the series because of where she starts and where she has to go – it’s a massive transformation. A year has passed since third season ended, and you can’t underestimate how that has changed her. Morgana has fully embraced her magical side now – she doesn’t have to play the dual role game anymore – and that is reflected inside and out.

QUESTION: Morgana has also given up wielding swords for telekinetics, tossing knights 20 feet in the air. Obviously it’s an effect, but do those scenes still give you some playful thrill?

MCGRATH: I love those scenes. Every time a woman gets to throw a man around the room, it’s good. To take a man like Tom Hopper, who is around 6-foot-5, and toss him across the set with just the power of your mind, oh, that’s fun.

QUESTION: Morgana is the villain, but she didn’t start that way – and the fans adored her. So how do you create some form of humanity or sympathy for such a wicked character?

MCGRATH: It’s fairly easy for me because ultimately I believe in what she’s doing, and why she’s doing it. She’s been betrayed by her father, ostracized from her family, and she’s all alone. She’s been taken down this path and, now, in Season Four, she’s lost her sister. So she’s running on pure revenge. Pure adrenaline fueled by pure revenge. I do feel sorry for her. If you look at it from her perspective, she’s just desperately trying to get back something she lost. I think audiences will sympathize with that.

QUESTION: Your fame has gone global, and there’s no greater testament to that fact than seeing the UK government recognize the series’ popularity with a set of postage stamps. What’s it like to find your face on a stamp?

MCGRATH: Honestly, that is so cool. It’s actually a bit surreal. There’s an envelope that goes with the stamp, and I took the stamp, put it on the envelope, and mailed it to my mother. She now has it properly displayed – she was so happy and proud. It’s funny because often those things – the stamps and toys and action figures, etc. – come out while we’re filming, and we’re so apart from things while on set that it all just kind of washes over you. But then when you see the reaction in the eyes of your family – to see how they react to the toys or stamps, or to be on stage at Comic-Con and see that little glint of joy in your brother’s eye – that’s when you realize how lucky you are and how special the job is that you’re doing.

QUESTION: Have you learned anything about yourself from playing Morgana?

MCGRATH: I guess I’ve learned that I love bringing out my inner bitch, because I play those roles so well. I certainly keep getting cast as these horrible, horrible women, so I must be underneath, right? (laughs). The wonderful thing about playing Morgana is that she’s so different from me that it’s very clear when I’m being Morgana and when I’m Katie. I don’t try to kill my siblings. (laughs) So there’s no confusion, no blurred lines. But I do keep getting these bad girl roles. The funny thing is that, honestly, I don’t think I’m believable as these aristocratic mean girls. But I do love playing them.

QUESTION: You’ve done a number of projects – most notably MERLIN and the upcoming Labyrinth (again with John Hurt) – that take place during medieval times. Are you drawn to this time period? And if you could’ve picked an era to have lived, what would it be and why?

MCGRATH: I think this period is drawn to me. Maybe people don’t see me as believable playing a person of today. I guess I’m just more realistic in a corset and funny hairstyles. (laughs) Still, if I could have picked an era to have lived, I think I would’ve loved to have been one of Louis XIV’s mistresses. They were so fantastic and aristocratic, and they had so much power. And he was such a renaissance man. I think I would’ve fit into that nicely.

QUESTION: Can you watch Merlin or any of your various projects and enjoy the shows/films as your fans do, or does your on-screen presence distract you?

MCGRATH: I can’t watch most of my work. Once I come on screen, all I can think of is “What am I doing with my hands?” or “Why did I lean that way?” or “What’s THAT look on my face?” It’s too difficult to not focus on evaluating my acting. The great thing about MERLIN is that I can be quite separate. There are so many episodes where I’m not in many scenes – I think probably 75 percent of the season has scenes I wasn’t involved in filming. In that way, it’s all new to me. So I can sit down and thoroughly immerse myself in MERLIN.

QUESTION: You’re known as a voracious reader. What are you reading now?

MCGRATH: The Lies of Locke Lamora! Genius. My brother got me the second book for Christmas, too. And Jitterbug Perfume, which was a present from my make-up artist on Labyrinth. She swears it’s epic, and I trust her. She was pretty epic herself.

QUESTION: Do you have any appointment television shows?

MCGRATH: The West Wing. God, I adore that show. And I have to watch Band of Brothers every time it’s on telly. It’s the most perfect 10 hours of viewing ever made.

QUESTION: What’s the current favorite song/album on your iPod?

MCGRATH: Future Islands, a great, epic, wonderful band. The new Florence and the Machine album. I love her, I want to be her.  And Gun and Roses – there is never a time when GnR is not perfect.