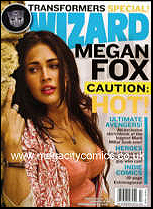 Once upon a time there was a powerful Wizard who had evil in his heart. He saw the comic world as a place he could bend to his will. And for a time, publishing companies flocked to him as loyal lap-dogs. Their best artists and writers were doled out to him to make appearances at his traveling circus. He was gloriously powerful, but feared his mortality. Soon, his spells… terrible fluff charms with no bite or news illusions presented way past their prime… weakened his power. The Wizard flailed madly to stay relevant. The people of the comic world simply stopped paying attention. His power dwindled. His traveling circus became a geek show of tired acts. He was left with no choice. He took the few followers he’d kept a grasp on, and sucked their life force… and ran into the forest. And there he stayed, seething, and cursing the public for abandoning him. When a court jester dared make fun of him, he shot from the darkness! But the shot was less than even a first year spellcaster’s magic missile. It fizzled, and died before it could even hit. He-who-everyone-knows has quit magic altogether.

There was a time when the word “Wizard” was synonymous amongst comic book fans as a glorious thing. Wizard Magazine was the zeitgeist of the comic community. Wizard also put on amazing shows featuring top talent, insightful panels, and legitimately helpful workshops. And then the Internet became a thing.

Slowly Wizard became more and more out of touch. As comic book news was published more frequently, its articles became old hat by the time they reached print. The helpful price guide that anchored the last third of the magazine ceased to be of any value. And their shows? I think anyone who has long frequented my writings here know all to well that a Wizard Convention fell from grace harder than Lucifer. Most recently, Wizard shut down its publication arm. It took subscribers’ cash, refused to refund it, and started publishing an e-magazine. No one read it. It shut down too. And should the Internet be believed… the now resigned CEO, Gareb Shamus, perhaps attempted to get an artist fired from his day job for making a scathing webcomic about him.

Shamus reportedly attempted to get an artist fired from his day job for a webcomic published on The Gutters. No other details aside from the strip’s writer (and Gutter EIC Ryan Sohmer) are available, aside from his post on the subject. As he said:

“Should you find yourself the subject matter of a Gutters page, and take offense to it, don’t go after my artists. Should you be so offended that you attempt to get someone fired from their day job, don’t be a coward.

Let’s pontificate on this, shall we? If this is to be true, Gareb needs his head checked. Last time I looked, the Internet is a place built on the idea that anyone can say anything they want about anyone else short of legal slander or accusation of murder or rape. I don’t actually know if that’s true, but it sounds right, doesn’t it?

Perhaps Shamus forgot he once ran a magazine that sent quite a few barbs towards Marvel, DC, Image, Dark Horse, and anyone else in the pop culture arena. Half the fun of Wizard, in its hey-day, were its jokes crammed in the margins and in word balloons to article’s pictures. And not once did I read of them getting reamed by Rob Liefeld for drawing pretty man boobs… let alone have an artist potentially fired for drawing a commissioned strip. It’s mind-numbing if this indeed happened.

It’s a sad tailspin the Wizard corporation seems to be in these days. I’ll be honest. I subscribed to their e-mailed magazine when it came out. I gave it three issues. And then it was junked, I unsubscribed, and moved on with my life. For all the good they used to represent, they simply never figured out a way to make their content current. Suffice to say with the utter glut of talent around the edge of this industry just waiting for a chance to write a nice op-ed piece, or jam on a funny strip… Shamus and company truly can’t see the forest for the trees. Well, I’m a nice guy.

And Steven Shamus was immensely helpful in getting Unshaven Comics into two very excellent conventions this year. So, here’s my good deed of the season; Wizard (are you paying attention?), here’s how you can fix your tattered reputation:

1. Have Gareb Shamus post an honest-to-Rao apology to the comic fans around the world. We need to know, in detail, why money was taken for subscriptions not filled, and nothing was done to even things up. We need an apology for promising content, and never delivering. If there’s a pool of people’s money sitting somewhere, you need to make it right. Take it, commission some jam pieces from the artists who still may like you. Better yet, get young, up and coming talent and commission them to do some great pieces. Then send that artwork to the former subscribers, with a big fat I’m sorry written on them.

2. Take the conventions you own and put them back in the hands of those who make the industry work. Ditch the aging wrestlers, and D-List sci-fi extras, and find a way to get back the creators who make these shows what they are meant to be… comic book shows. Not pop culture festivals. Mend fences with those you lost over the years. Comp them. Get them back into the buildings by any means necessary (like groveling)… so they can see their fans. Get them to interact in sketch-offs, trivia contests, and wicked debates. Make the conventions a place to be, and be seen; Not just an overgrown flea market, and autograph zone.

3. Take what resources you do have, and create timely content for other people’s more successful sites. The industry doesn’t need another Newsarama, Comic Alliance, Comic Book Resources, Bleeding Cool, or ComicMix. But all of those sites sure like a good article, a snappy comic, or relevant video. Create the content, release it for free, and excite the fans again. Earn back the goodwill you once had by doing what you should have done a while ago; Apologize. Work hard to earn back the trust and respect from the industry you took for granted, and produce something that stimulates the fan base… instead of pandering to your stock holders in an attempt to appear profitable.

We see through the spells, Wizard… and we know all your tricks already.