MICHAEL DAVIS: The Art of the Deal, part 4 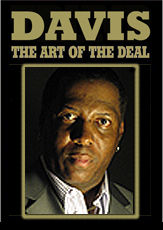 Please refer to part 1 and part 3 of this series for background. Part 2 was my attempt to try and underscore what I was trying to get across by writing these series of articles. Yeah, I still have no idea why I wrote part 2 either. To recap, I had an idea to get comics in the school system taught as a high interest low level reading curriculum.

Step by step my process was:

Come up with the idea.

Figure out the barriers to entry.

Developed two specific programs: one for Texas, one for California.

All above steps taken, so now I need a partner.

First rule of business: never use your own money.

That’s my first rule anyhow, rather or not you talk about it is on you but the less said about who is writing you a check the better.

There was a period in my career when I wanted to own everything so I paid for everything. I had some success but realized later than I should have, paying for everything can be a dangerous road to travel on unless you have really deep pockets and can afford to lose a grip.

A “grip” is a lot of money. Sorry, sometimes I revert back to where I grew up. You can take the man out of the hood but you can’t take the hood out of the man.

That’s not entirely bad and I’ll get back to that later.

I’ve done quite a few deals where I put up the development money and took all back end… meaning I waited for the venture to start making money to recoup and profit from it.

Sometimes paying for everything was a great idea, sometimes not so much. I don’t regret paying for development the projects I did so one but except for a passion project of mine I doubt if I will ever do it again.

If you have the cash and want to control and own everything in your deal financing everything may work for you. But before you empty your life savings to finance, direct and produce and own your project give this a thought, would anyone but you pay to do what you are about to do?

Each time I sign a deal where someone else is investing in my idea that further validates that I just may be on to something.

I mentioned above a passion project that I want control all aspects of the production. I’m holding out to completely control 100% of everything so I may bite the bullet and write the check myself but for now I’m still looking for the right partner to underwrite the venture.

The right partner is what I needed for The Action Files, my comic book reading program for schools.

When looking for a partner, be very careful to consider everything, not just the money. I don’t care how much money they bring to the table – it can be a nightmare.

I’ll say it again, it can be a nightmare.

I can’t go into particulars as to why a deal or two bankrolled by a partner turned out to be a nightmare (gag order, restraining order, hit men and a angry midget among other less pleasant things) but trust me it can be so think long and hard before you take that check.

I was lucky enough to have three different companies interested in The Action Files. I met with all three and decided the best place for The Action Files and myself was powerhouse publisher Simon & Schuster. At the time they were one of the biggest publishers of mainstream and educational materials in the world.

At the time they were one of the biggest publishers of mainstream and educational materials in the world.

After a series of meetings we came to an agreement and The Action Files was no longer an idea I came up with a year before it was now about to be a reality.

There is one more step that no one seems to tell young people.

One of the things it’s very important to remember which no one talks about is the vetting process. Any serious player who is about to invest millions of dollars in your idea is going to do their due diligence and vet you. That, in layman’s terms, means to check you out.

The process may be as simple as asking for references or as in-depth as a full background check. So don’t even think about telling a company you did something that you did not do when discussing your resume or bio.

I’m not just a seller of ideas (content) but I’ve run a few entertainment divisions at major companies and was a buyer. As head of my own company I’m often pitched projects for me to take to a film or television studio, comic company or mainstream publisher that I’m already in business with. I’m approached to find financing or finance projects myself or partner with someone to create a project. I’ve been very successful in brokering quite a few deals that I did not create.

I’m currently developing a slate of projects with Wayne Brady as an example of how a partnership would work. Wayne and I are working on a book and an animated project.

Unless I know someone well personality or someone comes to me from a real good referral I almost never get involved with other peoples’ projects. I’ll give advice all day long but I’ve been burned too many times to get involved with others I don’t know from Adam. It happens from time to time but it’s as rare as a black guy from Compton voting Republican.

The vetting process can killed your dream deal faster than a sex scandal can kill your hope to be President Of The United States… Herman!

Tell people the truth about what you have or have not done. If your idea is a great idea and you have no experience at all tell the buyer. More than likely the company will respect that and proceed with that in mind.

I’ve sold TV shows and I had no idea how to produce one when I sold my first show. I have a better idea now but I’d be an idiot to think that I could produce and an even bigger idiot to say that I wanted to.

The vetting process would have outted me faster than Ricky Martin on TMZ.

It’s not just making sure your background is legit – it’s also avoiding the one bullshit line that I’ve heard a million times and it’s just bullshit.

“Disney wanted to do this but I didn’t like the deal.”

I’ve heard that line at least a thousand times in 20 years.

It’s bullshit, and unless your name is Tom Hanks or someone of that stature using that line in a meeting will surely kill any deal you had dead if it was not dead already.

Yesterday at a restaurant some guy recognized me from a CNN interview I did years ago. He pitched me this project while I was waiting for a meeting. Frankly, the idea was pretty darn good and I was considering meeting with him to discuss it when he said…

“Disney wanted to do this but I didn’t like the deal, so I’m bringing it to you.”

“Whom did you meet with at Disney?”

Nothing from him but a blank look, because it was all bullshit. After what had to be a minute he said he had to check his notes and blah, blah, yada, yada, yada.

So, if you have the next great idea and you manage to get a meeting to pitch someone, tell the truth my friend, nothing but bad things can happen if you don’t.

My project from idea to signed contract took a solid year and a lot of work. The Action File reading program started in 1996 and has since moved to Pearson Learning where it’s still going strong.

As you go forward remember my second rule of business: don’t let anyone discourage you or try and kill your dream. Dreams do come true and maybe there’s a tip or two within this series that can help a little bit towards yours, young Jedi. Good luck… and if Disney wants to do your project let them.