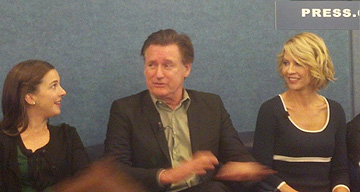 There’s a lot to love about Washington, D.C., but let’s be honest: living in such a political town it can be easy to get tired of politics. Rather like the way I wasn’t big into watching legal shows while in law school, my first inclination, having lived in the D.C. area for going on ten years now, surrounded by politicians and government buildings and workers, wouldn’t necessarily be to watch a show about the President.

But when I saw the description for 1600 Penn in a media event alert in The National Press Club newsletter a couple of weeks ago, and then saw that Bill Pullman would be playing the President in this NBC show about the First Family in the White House, I knew I’d have to give it a try. I mean, come on – Pullman was a win last time he was President (not to mention his roles in two favorite movies of mine, Spaceballs and While You Were Sleeping), even before he made that speech on the airstrip. The scene where he’s looking after his young daughter in the White House in Independence Day has always been a favorite, as one of the moments that adds heart to an all-out alien invasion movie full of explosions.

As I’ve discovered after watching the pilot for 1600 Penn and after a Q&A with the cast and producers of the show, 1600 Penn may have a slightly different kind of President, but its goal is also to be full of heart. The show is premised around “an average American family living under one big roof as the nation’s First Family and dealing with everyday struggles inside the Oval Office,” and thus far, I think it delivers reasonably well.

I’m always wary of reviewing any show based on just the pilot (my preference being to give a show two or three episodes to make an impression), but after a half-hour of President Gilchrist and co., I can at least say that I would definitely watch again. From the first episode, the show has a warmth and humor to it that catches my interest, even if it occasionally struggles to find a balance between the seriousness of politics and wackiness of comedy. Though there are some moments of fun situational comedy, where it does best is when it finds humor in the deeper dilemmas (and frequent awkwardness) of raising a family in such an unusual situation as this.

It also finds humor in the skill of its cast members, notably co-creator Josh Gad, who plays blundering oldest son Skip. From the publicity photos and description, I had misgivings about Josh’s character at first. Such a character could easily go too far and either steal or ruin the show; but as written and played here, thus far there’s a balance of good-hearted sweetness and warmth to the ineptness (which is apparently one of Josh’s hallmarks) that actually plays well. It seems it will work to “build the show” around Josh, as the creators have intended, as long as his character doesn’t lose that balance.

Jenna Elfman, who plays the somehow believably competent but also zany stepmom and First Lady Emily Gilchrist, also acquits herself well in the pilot, managing to humorously juggle several pieces of a problem in a way that just barely keeps it together so it all works out in the end. Bill Pullman also delivers, but the onus of trying to play a believable President in a situational comedy doesn’t yet seem to give him many of the humorous moments we know he can do so well; although the heart is there, and he does have one quiet little comedic line with press secretary Marshall Malloy that is perfectly done.

Yet one thing I like about the show so far is that it is somewhat believable – and that may be due to the fact that co-creator and executive producer Jon Lovett served as an Obama speech-writer (and joke-writer) for three years prior to leaving the White House for full-time comedy writing. Joined by Gad, Jason Winer, and Mike Royce, he’s created a show that’s an amalgam of that reality and the wacky-but-well-meaning world that Josh Gad’s characters generally inhabit. According to Lovett, he always wanted to write a comedy, but when he left the White House, he wanted that comedy to be about “anything but the White House.” As if on cue, Gad and Winer approached him about…a comedy set in the White House. But after all, they do say to write what you know, and after Winer explained the concept to him, Lovett says “we got so excited about the ideas and stories and twists we could come up with for a show centered around the Oval Office, the world’s most famous home office. After all,” Lovett says, “President Obama says all the time that one of his favorite things about the White House is that he gets to ‘live above the store,’” and the setting offers a lot of potential for unique approaches.

While Lovett has some prior experience with what life at the White House is like, to make the show more authentic he spent time researching what family drama would look like “under the prism of a twenty-four hour news cycle,” studying how this has played out in previous administrations. Other show members also prepared in various ways. Jenna Elfman, to get ready for her role as First Lady, read about former First Ladies, looking for a common denominator or standard for embodying the role – and discovered that there really isn’t one, as each First Lady makes her own mark on the office. Elfman expressed admiration during the Q&A for current First Lady Michelle Obama, and her “energy and participation and warmth, and her contributions to health…and her role as a mother.” She also cited the feisty and determined Eleanor Roosevelt as a past First Lady she admires.

Bill Pullman, in getting into his role, apparently had some difficulties leaving it behind on the set, occasionally citing his (fictitious) military history at home and saying, “nobody get up yet!” while he was sitting down. (There’s a scene in the pilot in which the President is meeting with his military advisors and, properly, they only stand after he has stood up to leave.) Martha MacIsaac, who plays 22-year-old daughter Becca, and is discovered to be (unmarried but) pregnant in the pilot, had a sister who was also unmarried and pregnant at around the same age, so drew from that in her acting.

The creators of the show discussed other instances in which they drew from their own experiences, taking “a kernel of truth from our lives and seeing how that takes on new life in the dynamic of this family.” One example given is of an upcoming episode in which Emily, as a former political consultant who was instrumental in the President’s rise to the White House, gets carried away with “helping” her youngest stepson Xander as he runs in a middle school election. (And in answer to my question at the press event, upcoming episodes will feature a further look into what led to the President and family getting to the White House, which is definitely a storyline I’d find interesting.)

What’s sort of fascinating about listening to the cast and producers talk about this show is how much they are aiming to root this in what it would “really” be like for these characters to be the First Family; while the other goal of the show is, of course, to entertain and amuse. It would be so easy for a premise like this to lose its integrity for a quick laugh or just-slightly-too-unbelievable premise, or to be just a tad too serious for the audience to really get behind as a fun show to keep watching. However, as it stands from the pilot and plot examples from upcoming episodes (including one in which Josh’s character Skip engages in discussions with protestors outside of the White House, with predictably humorous and unexpected results), it looks like this show might just succeed in hitting its mark. I’m planning to tune in to find out if it does.