Bill Willingham on “Fables” vs “Once Upon A Time” 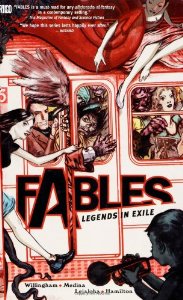 Comic Book Resources gets Bill Willingham to talk about the similarities between the long-running Vertigo comic series Fables and Once Upon A Time:

For those of you who just came in, let’s start with some of the basics. “Once Upon a Time” is a weekly TV series showing on the ABC television network. It’s just over a month old now, having aired four episodes by the time of this writing. It was created by Adam Horowitz and Edward Kitsis.

“Fables” is a monthly comic book series, published by Bill Willingham, the author of this essay.

via Bill Willingham on “Fables” vs “Once Upon A Time” – Comic Book Resources.