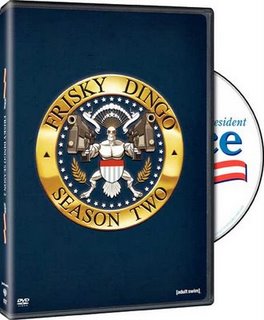 Reviewing the Adult Swim DVDs has been educational and occasionally entertaining.  I find the third series, [[[Frisky Dingo Season Two]]], the most enjoyable because it takes absurd situations and characters and uses smart humor to get its point across.  The series, about Killface, an alien super-villain come to Earth and his struggles against the heroic Awesome X, pokes fun at the conventions of animation, super-heroics and action flicks.  They ratchet things up in season two, collected here, as Killface finds himself accidentally solving Global Warming and running for president.

Now the humor sharpens as creators Adam Reed and Matt Thompson skewer politics and does so while serializing the campaign across most of the twelve episode season, which ran on Cartoon Network from August – October 2007 and March 2008.  The escapades build as Killface’s newfound popularity has him begin ton contend with the political machine and rivals begin to figure out how to campaign against him.  You see everyone pander to one base after another; especially hilarious was when Killface discovers the Bible in “The Miracle”. Another fun running gag is the confusion between Fred Hunter and Fred Dryer, who starred in the NBC series [[[Hunter]]], with the notion that either is Vice Presidential material pretty offbeat.

The animation is as simple as Metalocaplypse but better designed with terrific, rich backgrounds plus varied looks to the people.  The dialogue and voice work is rather good which matches the quality of the writing.  Reed voices both hero and villain which is a nifty feat and he brings individual personality to both as he plays off himself, which is not easy.

The single disc DVD, on sales January 6, comes with a skit featuring the Xtacles, which is spinning off from the show.  They are dim-witted armored forces normally controlled by Awesome X, but with him currently off planet, they are without guidance leading to humor.  The series debuted two episodes in November and based on this skit, looks to be a little less clever than its host. The other extra is a political ad parody promoting the release of the DVD itself.