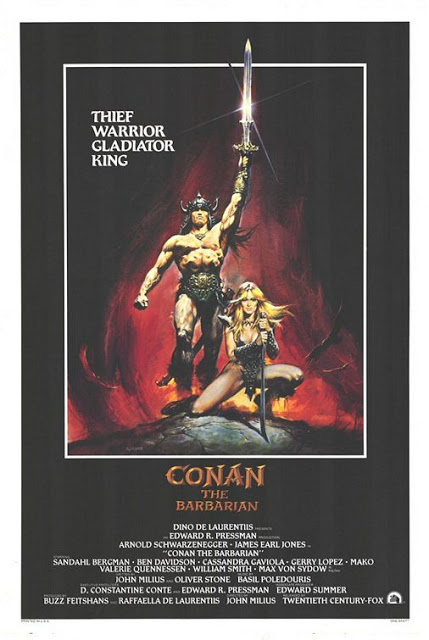 1982
Universal Pictures
Directed by John Milius
Produced by Buzz Feitshans and Raffaella De Laurentiis
Written by John Milius and Oliver Stone
Based on the character/stories created and written by Robert E. Howard
I knew that director John Milius and his screenplay co-writer Oliver Stone got the character of Conan five minutes into the movie.  During the opening credits we see Conan’s father (William Smith) forging a mighty sword.  He then takes the young Conan (Jorge Sanz) to the top of a mountain.  He explains how The Riddle of Steel was stolen from Crom, the god of Cimmeria and that Conan must learn The Riddle of Steel for himself because as his dad succinctly sums up: “For no one in the world can you trust.  Not men, not women, not beasts.  But this-“ and he holds up the gleaming sword.  “-this you can trust.”
It’s not long after this that Conan’s parents, along with all the other adults in his village are slaughtered by the servants of Thulsa Doom (James Earl Jones) a powerful sorcerer who is also the leader of a cult that worships the snake god Set.  Conan, along with other children are taken as slaves and chained to The Wheel of Pain, a gigantic mill which they push night and day, through weather fair and foul.  It’s torturous work but it has its benefits.  The young Conan grows up into Arnold Schwarzenegger as pushing that damn thing has built up muscles of Herculean proportions.  He’s bought by The Hyborian Age’s version of a fight promoter and wins fame as a gladiator.  He’s freed by his master and after meeting up with the master thief and archer Subotai (Gerry Lopez) takes up a career as a thief himself.
It’s during their attempt to infiltrate The Tower of The Serpent and steal The Eye of The Serpent that Conan meets swordswoman and thief Valeria (Sandahl Bergman) who will become the great love of his life.  It’s their successful and daring theft that brings them to the attention of King Osric (Max von Sydow) who hires the trio to rescue his daughter from The Cult of Set.  While Valeria and Subotai see this as a chance for a really big payday, Conan has his sights on taking the head of Thulsa Doom.

Now, you can say whatever you want about CONAN THE BARBARIAN but it won’t faze me because if nothing else, John Milius and Oliver Stone respected Robert E. Howard’s enough that they obviously not only read his stories but incorporated elements of some of those stories into the movie including what is probably the most famous scene in any Conan story; his crucifixion and his killing of a vulture pecking at his flesh with nothing but his bare teeth.
This movie, along with “The Terminator” launched Arnold Schwarzenegger’s career and it’s easy to see why.  Schwarzenegger at that time looked like he was designed by Frank Frazetta and he inhabits the role as well as Sean Connery did with James Bond or Michael Keaton did with Batman.  For those who claim that Schwarzenegger can’t act, I point out a terrific scene where Conan, Valeria and Subotai plan their assault on Doom’s stronghold.  While Bergman and Lopez have all the dialog, Schwarzenegger says far more than they do in the way he’s sharpening his sword.  And even though Schwarzenegger gets a lot of mocking for his dialog and accent in this movie, I like it.  I mean, the guy does sound like a barbarian from pre-history.   In fact, I like it that 90% of the characters have accents in this movie as they do sound as if they come from another age rather than modern day Californians playing dress up.
The supporting cast is outstanding.  James Earl Jones infuses Thulsa Doom with enormous presence and a true sense of not being entirely human.  His henchmen, played by Sven-Ole Thorson and Ben Davison are suitably impressive.   Bergman and Lopez back up Schwarzenegger well and create their own characters in some really wonderful intimate moments such as the one where Subotai tells the wizard Akiro (Mako) that since Conan, as a Cimmerian will not cry to show grief, Subotai must do it for him.  Mako contributes comedy relief without being buffoonish or degrading his own character.  But that’s to be expected because Mako is epic in everything he does.
And speaking of epic, the musical score by Basil Poledouris has become respected as one of the finest musical scores ever and rightly so.  A large part of the enjoyment of watching CONAN THE BARBARIAN comes from the sheer power of the score.  Poledouris also has done the scores for “Quigley Down Under” and “Lonesome Dove” that are easily as epic as the one for this movie.
So should you see CONAN THE BARBARIAN? No doubt you already have.  It’s one of those movies that everybody and their mother has seen, it seems.  Even chicks who normally shun this type of movie like it was the Ebola virus have seen CONAN THE BARBARIAN.  It’s violent, it’s raw, it’s sexy, and it’s fun.   There’s an excellent reason why CONAN THE BARBARIAN is rightly regarded as a classic.  It truly is inspired by the spirit of Robert E. Howard in a way that the recent remake never even comes close to.  If you’ve seen it, what the hell…watch it again.  And if you haven’t, I envy you discovering it for the first time.  Enjoy.
129 minutes
Rated R
Share