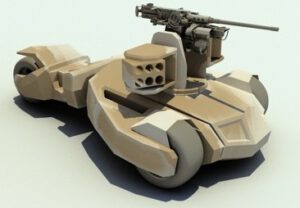 In the movies, Batman fights crime with a collection of, to quote Jack Nicholson, wonderful toys. Hisham Awad, project leader of defense company BAE System’s future protected vehicles group, liked some of those ideas so much he used them to build an assault vehicle:

While Awad was showing one of his team’s concept vehicles, the unmanned skirmisher known as Raider, another of the assembled journalists gave a low whistle.

‘Yes, we liked the look of that, so we designed something similar.’

What, the Batmobile in Batman Begins and The Dark Knight?

‘Yes, that one. You see, it turns like a motorbike and it has the same wheel configuration.’

Yes, yes, but you’re basing a future fighting vehicle on something you saw in a film?

‘Well, why not?’ Awad replied. ‘In all seriousness, we decided that we didn’t have a monopoly on inspiration, and if we saw something in a film that we thought might be a good idea, why not take a look at it and see if there’s something practical we can develop?’