FORTIER TAKES ON THE MERKABAH RIDER A SECOND TIME! 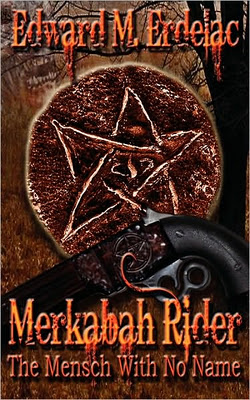 Perhaps the most popular sub-genre in the resurgence of new pulp fiction is that of the weird western. It seems everywhere one turns these days; another publisher is coming out with another anthology which combines the cowboy classic setting with all manner of bizarre and horrible trappings.  None is more effective and original than Edward M. Erdelac’s Merkabh Rider series.  In his first book, “Tales of a High Plains Drifter” we were introduced to the Rider, last of an order of Jewish mystics searching a demon infested west on the trail of his teacher, who betrayed and massacred the order known as the Sons of Essenes.  In this second volume, the Rider’s travails continue through four new adventures.
In “The Infernal Napoleon”, the Rider finds himself in an out of the way watering hole used by freight haulers.  Here, in this desolate way station he’s set upon by a vengeance seeking demonic dwarf who controls a satanic canon and is willing to destroy dozens of innocent lives to achieve his ends.  But in all things, there is a balance and the aid of a young Samson-like strongman may tilt the odds in the Rider’s favor.  The action is fast and brutal and sets the tone for the entire book.
Next is “The Damned Dingus.” During a train robbery by a group of dim witted varmints, the Rider’s unique Volcanic pistol is stolen. With the aid of the famous gunfighter, Doc Holiday, and an experienced deputy marshal, the Rider travels to an abandoned mine in the high country and encounters the savage menace of an invisible monster capable of ripping men and horses to pieces.  What is it the creature is protecting and what is its connection to his old teacher’s twisted plans?
Leaving Arizona, the Rider learns he has been labeled a wanted outlaw with a bounty on his head.  Fleeing into New Mexico, he encounters a band of Apaches battling an age old horror that dwells beneath the earth.  Here Erdelac takes a page from H. P. Lovecrafts’ canon in using the evil Old Ones from beyond the stars as the threat and only the Rider and his arcane skills can free the territory of the vile and corrupted She-Demon in the episode called appropriately, “The Outlaw Gods.” Before it is finished, the Rider will have led an army of Spanish ghosts in an epic battle across the astral plane.
Finally, still assailed by Queen Lilith’s invisible sprites that are draining away his life essence, the Rider is found by Kabede; a Merkabah Rider from a secret Ethiopian sect of the Sons of Essenes.  Kabede convinces the Rider that the answers to Adon’s diabolical plan, the meaning behind the so called Hour of Incursion, can only be answered by the Prince of Hell, Satan and they must travel to Hell in astral form.  Erdelac’s depiction of the various levels of Gehena are as evocative as Milton’s own “Paradise Lost” and deftly combine Judeo/Christian tradition with other prehistoric myths.  In the end, he weaves a complicated but amazing tapestry of mankind’s ongoing quest to explain the meaning of creation and the eternal conflict between faith and hopelessness.  By the end of this final chapter, the Rider and his new companion have set into motion actions which will either lead to their defeat at the hands of Adon and his minions, or a miraculous victory against the forces of alien damnation.  Calling this finale a cliffhanger is a major understatement.
“MERKABAH RIDER – The Mensch With No Name” is a terrific continuation of an exciting saga this reviewer imagines will culminate in a third and final volume.  This is easily some of the finest western/horror/action writing on the market today and comes highly recommended.  The Merkabah Rider is truly a pulp hero like no other.
Share