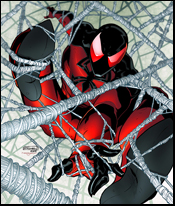 Hmmm. It’s been rather quiet, but over the past several weeks Marvel’s been cancelling titles steadily, one or two at a time.

Many speculate S.H.I.E.L.D., Generation Hope, and Deadpool MAX are not long for this world as all three have direct sales figures in this same neighborhood – around 15,000 to 20,000 copies. More interesting (at least to me), Ghost Rider’s last issue will be released around the time the second movie comes out. That’s hardly a vote of confidence in their film division’s latest gem.

Separating the wheat from the chaff has long been a comics publishing tradition, and doing so in such a manner as to generate consternation and paranoia among both the creative community and the few surviving retailer outlets is standard operating procedure.

Twelve titles and counting is a lot, but I am certain it does not represent a decision to publish fewer titles. Fewer money losing titles, sure, and that’s an act of business sanity. But there are at least two very significant reasons why Marvel will simply replace them with other stuff come the spring.

The first is called “the fourth of May.” No, that’s not another X-Island Fear style event; that’s the release date for The Avengers movie. Note Marvel has yet to cancel any titles with the word “Avengers” in it, even though Avengers Academy and some of the current Avengers mini-series sell in that red zone.

The second is called “the third of July.” You guessed it; that’s when The Amazing Spider-Man movie is foisted upon an all-too-suspecting public.

If Marvel’s past habits remain intact – and by “past” I mean “2011” – we can expect to see a plethora of sundry Avengers and Spider-Man movie tie-ins… like, say, The Scarlett Spider.

Of course, most comics publishers would murder their aged grandmothers and their puppies for sales figures in the realm of those now-deceased Marvel titles. I look forward to their organizing an “Occupy Marvel Comics” encampment.

Historically, DC and Marvel go through this housecleaning OCD at roughly the same time, a remarkable coincidence by the standards of anti-trust law. This time, maybe not. DC’s only now beginning to sense which of their “New 52” titles are losing steam, although with the massive talent changes in that line it does seem they’re busy rearranging the deck chairs on the Titanic. Nobody – certainly nobody in upper management at DC – expected all 52 to be successful, and if they maintain that “52” campaign they’ll just replace this fall’s losers with next summer’s losers.

This is the comic book food chain. Eat what you like while the food’s on your plate.