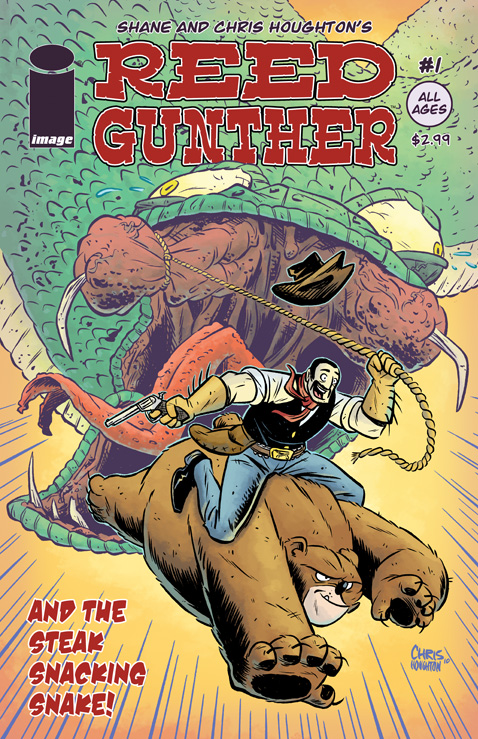 Reed Gunther focuses on the titular cowboy, his smarter-than-average bear Sterling and their adventures through an Old West filled with giant snakes, shark monsters and ancient totems. The central man/bear duo is incredibly charming, akin to a Wild West Wallace & Gromit. Reed’s overconfident, super-manly nature contrasts nicely with Sterling’s silent but expressive puppy-dog nature. Granted, Reed is also a bit of a coward and Sterling can be an absolute badass, which provides for some great character moments. There’s an hysterical joke about their somewhat one-sided communication in issue 4, which I won’t ruin, but was easily the biggest laugh in this first story arc, which is saying a lot as this book is often laugh out loud funny.

The third member of the gang, Starla, is a no-nonsense ranchess with a soft side. The cast is rounded out with a small army of mustache-twirling villains and henchmen, and if I had to make one criticism of the series writing it’s that the villains feel somewhat underdeveloped. Don’t get me wrong, I enjoy an evil man with an evil-sounding name being evil because he’s evil as much as the next guy, but when your leads are as vivid as Reed and Sterling you hope for the villains to match them in terms of characterization. Granted, we’re still only halfway through the story’s ten-issue run, so this will hopefully become a moot point. Other than that small criticism, the writing is across-the-board great. Reed and Sterling’s adventures are funny, exciting and original, and the scenery changes enough that you’re never quite sure where you’ll wind up when you turn the page, which is a great feeling when reading an adventure book like this. Shane Houghton’s witty, clever dialogue flies off the page as well. Reed is hilariously written, and his constant stream of bizarre exclamations (“Pickled Beets!” “Talluca Lake!”) could easily give Ron Burgundy a run for his money. 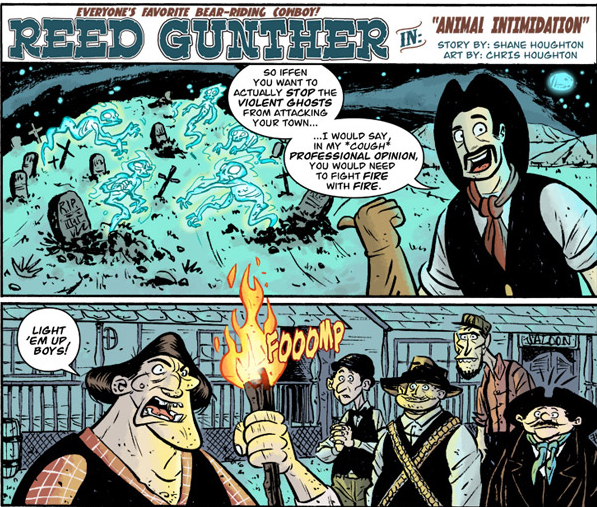 Chris Houghton’s artwork serves the writing perfectly. It’s cartoony and incredibly expressive with a great eye for background detail. Reed can be both goofy and heroic, often within the same panel, and Sterling is easily one of the most expressive comic book characters I’ve seen in a while. I was especially fond of the design of Agent Mundy, one of the series’ villains, who looks like a Bizarro Abraham Lincoln. The scope and scale of the artwork fits the series perfectly. It’s epic when it needs to be, yet even more impressive in the small character moments. There’s a particularly great two-page dream sequence in issue #4 that is a wonderful showcase of both Chris’ artwork and Ciaran Lucas’ colors. When the first four issues were self-published by the Brothers Houghton they ran in black and white, and the color only serves to give the stories an extra kick. Granted, that’s like adding jalapeno to a bowl of chili: It was great already, but the extra ingredient makes it so much better. The vistas of the Old West look fabulous, as do the dirty alleys of New York City and Houghton’s steady hand makes each look unique and impressive. His monster designs, an incredibly important part of the series, are unique and strange. They’re never quite scary, but eerie and otherworldly enough to get under your skin.

As of this writing we’re halfway through Reed Gunther’s ten issue run and I wish it would just keep on going. This is one of the most fun monthly series I’ve read in a long time. The Brothers Houghton have produced one of the most satisfying Wild West stories I’ve ever seen in a comic book, and I want to spend as much time with its charming, funny characters as I can.

TL;DR A Cowboy who rides a bear and fights monsters is just as awesome as it seems like it would be. Reed Gunther is clever, exciting and really really funny. Easily one of the most entertaining monthly series currently running.

Reed Gunther is a ten issue series by brothers Shane and Chris Houghton (words and art respectively). Issues 1-5 are available now from Image Comics, and a the first collected trade paperback will be available TOMORROW November 9. You can ask for it at your local comic book shop or support Spandexless and buy it through our Amazon store.

Brandon Beck is a writer/director/improviser living in Brooklyn, NY. He is currently working towards an MFA in TV Writing/Producing at the TV Writer’s Studio at Long Island University with the hopes of one day bending the entertainment industry to his nefarious will. He is more than happy to talk to you about Phish. You can see inside his mind by finding him on Tumblr or following him at @hellyesbrandon.