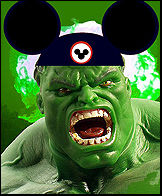 As is well-known, the Walt Disney Company purchased Marvel Comics a little over two years ago. Marvel joined the Muppets, Pixar, ABC and ESPN as tentacles of that great evil media empire that has done so much to homogenize the American culture. After all the jokes died down, some people wondered why the Mouse wanted the House that Jack Built in the first place.

Disney is a movie company, and Marvel’s shiniest family jewels – Spider-Man and The X-Men – were in the hands of competing studios (Columbia Pictures and 20th Century Fox, respectively) and aren’t likely to revert any time soon. The sundry Avengers characters were in the hands of Paramount Pictures, although Disney was able to purchase a nice reversion deal here. But, still, the motion picture revenue picture was severely compromised by the Spidey and X deals, and made all the more expensive by the Paramount buy-back. So, the question “why” certainly is valid.

Nobody that big buys a publishing venture – certainly not a comic book publishing venture – for the profits it will generate on its own. The phrase “fart in a blizzard” comes to mind. Merchandising and licensing revenues can be fairly attractive and Disney/Marvel/Muppets are a good fit. But… still… why?

One can argue that teevee in general doesn’t have much of a future, and I might agree. But teevee programming has one hell of a great future no matter what platform we’ll be enjoying in the future: cable, satellite, computers, tablets, integrated teevee/computer systems, visors, brain implants, whatever. And that’s where the Mighty Marvel Money Machine will become the Mouse’s cash cow, true believer.

Disney already has The Hulk, Cloak and Dagger and Alias in development. Of course “Alias” has to be renamed – it’s working under the title “a.k.a. Jessica Jones” right now, and the show includes both Luke Cage and Carol Danvers. Mockingbird is also in development as a Miley Cyrus style kids show, possibly as fodder for the ABC Family network.

Step back a pace and take a look at what’s going on here.

Most of these shows are built around female superheroes. As headliners, such characters are anathema to motion picture studios. But Disney is betting heavy, heavy bucks that the distaff side will draw a sufficient audience to warrant the investment.

That’s pretty cool – and very risky. Women heroes haven’t fared much better on the small screen: Nikita was renewed by the skin of her teeth, The Bionic Woman revival flamed out, as did Charlie’s Angels redux. David E. Kelley’s Wonder Woman didn’t make it past the pilot stage. Yet Disney is developing no less than three Marvel shows built around women.

So no matter what I might feel about Disney’s predatory influence on our culture, they are showing a great deal of courage here – courage they developed by purchasing Marvel.