“The Stan Lee Universe” is Out 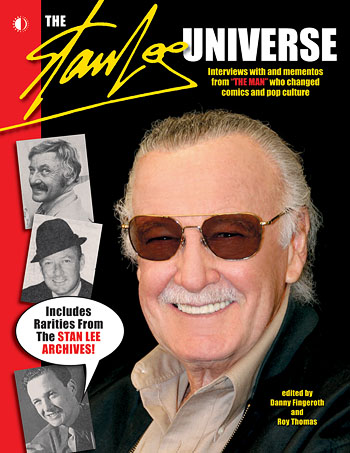 Some months back, I was asked by Danny Fingeroth to partner with him once more, stepping in during the final weeks of production on TwoMorrows’ The Stan Lee Universe. I proofread the book, doublechecked facts, filled in blanks, did some caption writing and told Danny and his co-editor Roy Thomas that it was a pretty solid tribute to a true innovator in the comics field.

The first copies came in from the printer while we were all attending New York Comic-Con and we were delighted with how good it turned out. Now, I received word this morning that the book is finally available for delivery. Since this seems to be my year with Stan, I wanted to bring this your attention. If you get it — or Stan Lee’s How Write Comics — let me know what you think.

Here’s the press release on the matter:

Face front, true believers! THE STAN LEE UNIVERSE is the ultimate repository of interviews with and mementos about Marvel Comics’ fearless leader! From his Soapbox to the box office, the Smilin’ One literally changed the face of comic books and pop culture, and this tome presents numerous rare and unpublished interviews with Stan, plus interviews with top luminaries of the comics industry, including JOHN ROMITA SR. & JR., TODD McFARLANE, ROY THOMAS, DENNIS O’NEIL, GENE COLAN, AL JAFFEE, LARRY LIEBER, JERRY ROBINSON, and MICHAEL USLAN discussing his vital importance to the field he helped shape. And as a bonus, direct from STAN’S PERSONAL ARCHIVES, you’ll see rare photos, sample scripts and plots, and many other unseen items, such as: PERSONAL CORRESPONDENCE between Stan and such prominent figures as: JAMES CAMERON, OLIVER STONE, RAY BRADBURY, DENIS KITCHEN, ALAIN RESNAIS and (Sinatra lyricist and pal) SAMMY CAHN! Transcripts of 1960s RADIO INTERVIEWS with Stan during the early Marvel era (one co-featuring JACK KIRBY, and one with Stan debating Dr. Fredric Wertham’s partner in psychological innovation and hating comics)! Rarely seen art by legends including KIRBY, JOHN ROMITA SR. and JOE MANEELY! Plot, script, and balloon placements from the 1978 SILVER SURFER GRAPHIC NOVEL, including comprehensive notes from Lee and Kirby about the story. Notes by RICHARD CORBEN and WILL EISNER for Marvel projects that never came to be! Pages from a SILVER SURFER screenplay done by Stan for ROGER CORMAN, and more! So get a jump-start on the celebration of Marvel’s 50th anniversary, and let this incredible book take you on a guided tour of the STAN LEE UNIVERSE. Excelsior! (Co-edited by ROY THOMAS and DANNY FINGEROTH.)
NOTE: The HARDCOVER EDITION Includes a deluxe dust jacket, plus 16 EXTRA FULL-COLOR PAGES of rare Archive Material, not found in the Softcover Edition.
Order at your local comic book shop, or use the links below to get it directly from TwoMorrows at 15% off (and get the free Digital Edition)!
192-page HARDCOVER EDITION:
$39.95 cover price (click to get 15% off and a free Digital Edition)
Digital Edition only: $9.95
Diamond Order Code: APR111202 (HARDCOVER)

In anticipation of this book’s release, TwoMorrows Publishing is letting readers download a FREE PDF PREVIEW at this link:
http://www.twomorrows.com/media/StanLeeUniversePreview.pdf
Share