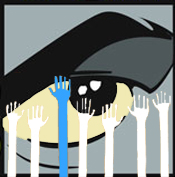 In Great Britain, they’re trying to change the law to prevent businesses from exploiting students by way of unpaid internships. This is not just good news for a democratic society, but for comics fans as well.

How is it good for society? Unpaid internships are a scam, a way for businesses to get free labor while giving affluent students an unfair advantage over other students. The students with the best connections get the best gigs, and they’re the only ones who can get the subsidy from Mom and Dad so they can afford to work for free. After graduation, it’s the well-connected kids who have better resumes. It’s another example of affirmative action for the rich.

Unpaid internships also rob the community of taxable income. The kids working for free, even those with trust funds, are most likely not paying taxes on those unpaid salaries. They accrue the benefits of being part of our workforce without contributing their fair share. The corporations are certainly not paying taxes on the profits they make from the kids’ work.

How is it good for comics? I just spent a pleasant few days at New York Comic-Con. The show is run by Reed Pop!, and they do a decent job. However (and this is a big “However”), I am always surprised to see people working at the show as volunteers. Reed is a for-profit company. Why do they need volunteers?

I don’t mean to malign the people doing these jobs. Far from it. The deal, as I understand it, allows them to get into the show for free in exchange for doing a few hours work.

This might be a lovely way to run a local show, something put together by fans for fans. It’s no way to run a major exhibition in a major city. It’s scabbing. It’s exploitive. It’s an insult to every person who struggles to make a living in entertainment, marketing and hospitality.

It’s also a liability nightmare. If a volunteer has an accident, or somehow harms a guest, who is responsible? Again, it’s one thing if it happens in somebody’s garage, and quite another when it happens at the Javits Center.

I understand that this is a tradition of fans pitching in to help at shows. I love volunteers, and I welcome all efforts that get us more involved with our various and respective communities. However, I don’t understand why we’re volunteering to make money for corporations, instead of for more worthy causes.

Unlike the New York show, the San Diego Comic-Con is a not-for-profit corporation, a 501(c)(3). They are dedicated to promoting an appreciation of comics. Fae Desmond and David Glanzer are among my favorite people. However, it is my opinion that the show has been completely co-opted by other industries – specifically movies, television, and gaming – and to volunteer for that show is to make a non-cash donation to the likes of Disney, Fox, Warner Bros. and Universal.

Maybe, as comics fans, we hate ourselves so much that we feel we need to pay major corporations for the privilege of their attention.

Let’s make them pay us instead. We can use the money for therapy.