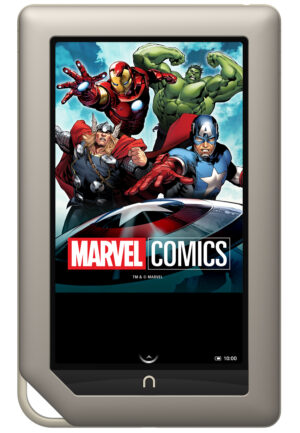 And the other shoe drops. Marvel Entertainment announced today that the long-anticipated Nook Tablet from Barnes & Noble will offer readers access to  a digital library of Marvel graphic novels.

“This is a huge opportunity for Marvel—and the entire comics medium—to reach a wider audience than ever before thanks to Barnes & Noble’s exciting new NOOK Tablet,” said Peter Phillips, Senior Vice President & General Manager, Marvel Digital Media Group. “Barnes & Noble is committed to offering customers a broad array of Marvel graphic novels, both digitally and through their massive in-store selection, which can only help bring fans into our exciting world of Super Heroes and unparalleled storytelling.”

Users can purchase digital copies of their favorite Marvel graphic novels through NOOK Bookstore™, with a selection including such hits as Civil War, Invincible Iron Man, Captain America, Thor by JMS, Astonishing X-Men, New Avengers, Marvels and more! These graphic novels will also be available on the highly-acclaimed NOOK Color™.

This is as good a time as any to note that ComicMix also has graphic novels available for the Nook platform, starting with the Harvey Award nominated EZ Street by Robert Tinnell and Mark Wheatley. More titles will be announced shortly.