JOHN OSTRANDER: Comics Lied To Me! 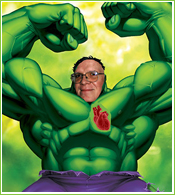 I’ve had some medical tests recently. Seems I have heart palpitations; lordy me, Ah do seem to be a swoon and mint julep away from being a Southern belle. (Hm. Wonder if they make chocolate mint juleps?) It means that my heart skips a beat every so often.

So I went to a cardiologist and he set up a battery of tests to see what this all means. In the first one, they injected a radioactive tracer so they could then do X-rays of my heart from different angles and see what’s going on.

I was ready. I knew the score. If comic books have taught me anything, it’s that radioactivity triggers a DNA change and gives you super-powers. Prime example is Spider-Man – got his powers from a radioactive spider, right? The Hulk got his from gamma radiation, which is a type of nuclear radiation, right? And it was a stress test, okay? What happens when you combine radiation and stress? The Hulk.

So I figured the radioactive stuff would combine maybe with X-rays and I’d get X-ray vision whenever I stressed out. Or maybe a bug might creep into the machine and I’d get X-ray and bug like powers. Spider-Hulk.

All I got was a bill. Not a duck bill. Or a goose bill. I received a financial statement saying I owed them money. What a rip off!

They also did what is called an “Echo Test” a couple of days later. It’s like when they do a sonogram for pregnant women using ultrasound only they do it for the heart. Ultrasound, eh? Okay, that could become something. Something ultra. I know the Ultra line was a failed bunch of comics for Malibu that Marvel bought up and forgot they had until recently… but it could maybe work, right? Combine ultrasound with the radioactive particle and the stress test and maybe I wind up with ultra hearing and X-ray vision. Add in any Hulk-like side effects and now we’re getting somewhere!

Zap. Zilch. Nada. Nothing. That’s what I’ve gotten. So far.

When they did the second part of the stress test, I had a choice. I could climb on a treadmill and get my heart rate up to a certain point or they could do it via an injection of chemicals that would also make my heart beat faster. Of course, some of the shots of the naked Scarlett Johansson – soon to return as the Black Widow in The Avengers flick – that popped up on the web would also probably do the trick but I wasn’t offered that option.

It was a hard choice. We all know about the treadmill in The Flash and how he uses it combined with his superspeed for time travel. Maybe being on the treadmill would combine with an increased heartbeat and would trigger the change. Seemed reasonable.

I opted, however, for the chemical version for three reasons. One – that seemed more likely to interact with the other events and convert my DNA to complete the change. Two – if I got superspeed and went back in time, I might change a little something that would induce a reboot of reality and DC just did that and it resulted in a skinny Amanda Waller. Third – I could do the test lying down. At my age, if you can do something lying down, that’s the option you take.

So I got the chemicals injected, waited forty minutes for them to travel through my system, and went back for more x-rays. I had high hopes for this one. I’d seen Captain America – The First Avenger and that’s more or less what they did with Steve Rogers: injected him with chemicals and bathed him in rays. That turned out pretty spiffy, right? Not only did he get turned into Captain America but it was a pretty darn good superhero film to boot.

SPOILER WARNING: There are no spoilers. You already can guess the outcome. I just got test results is all. They said I was normal. Normal. Since when?

I go in to see the cardiologist next week to get the findings. Friends have suggested that all I’ll get told is that I have an overheated imagination.