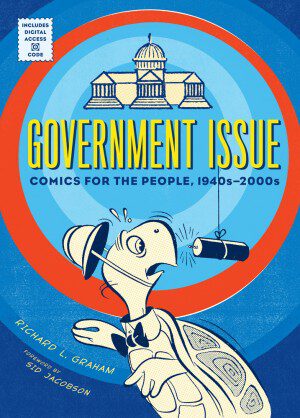 The rich history of comics is also one of the public’s perception of it being mainly for children. What is only recently being uncovered are the many ways comics have been used beyond cheap entertainment for the masses. As early as 1940, Will Eisner saw their potential and he was among the first to use the graphic form for educational purposes with what became P*S, the preventative maintenance magazine produced by the Army. During World War II, Stan Lee wrote comics to explain how forms need to be filled out and DC Comics did special editions of Superman to help teach America’s soldiers to improve their reading.

Now, we’re learning that the Federal Government has long been a proponent of using comics as educational and propaganda tool, dating back to the field’s infancy. Thankfully, Richard Graham has done the spadework that has uncovered the full flavor of material offered using your tax dollars. Government Issue is actually an important addition to our comics history, demonstrating the reach of the format and the value placed on its ability to communicate with the masses

Graham organizes his book by different subject matter – “military,” “employment and economics,” “Civil Defense, Safety and Health,” and “Landscapes and Lifestyles” – so you can get a better sense of how far-ranging this had become. And like most government operations, there was no central plan or design; no comics czar to ensure federally-produced comics met certain criteria for quality of accuracy. As a result, we see a variety of writing and artistic styles brought to bear in conveying the information to its intended audience. One of the worst results of this lack of control has to be the ham-fisted writing and terrible artwork accepted by the military for a piece on how homosexuals should consider admitting their persuasion to superior officers during the period of “Don’t Ask, Don’t Tell”.

Fortunately, though, Graham’s survey, for the most part, is an artistic treasure trove with some of the best people in the field doing work for Uncle Sam. The agency of Johnson & Cushing, better known for the commercial accounts in the ‘50s and ‘60s used their stable of illustrators for government work. As a result we get incredibly early Neal Adams work along with the efforts of the wonderful Alex Raymond. Milton Caniff, who entertained soldiers with his fanciful Male Call, also produced material. There’s some great Kurt Schaffenberger work during the ‘60s that you could mistake for an issue of Lois Lane.

The book has strong context from Graham’s chapter openings along with a contextual introduction by Sid Jacobson who was a part of this program as well. Being an Abrams book, the reproduced comics material looks wonderful and is preserved nicely on good paper and at a size that makes for closer inspection. One interesting revelation is that Walt Disney produced tons of comics for the government as a way of stay fiscally solvent, before the movies and cartoons really ingrained themselves in the fabric of society. We see efforts from DC and Marvel mixed in here with the lesser known works from Archie and others. Dennis the Menace and Pogo make surprise appearances, too.

Works likes these deepen our understanding of the field and is a welcome addition to our collective library and a Must Read for you.