Not a dream! Not a hoax! Not an imaginary tale! It was this week in 1996 that 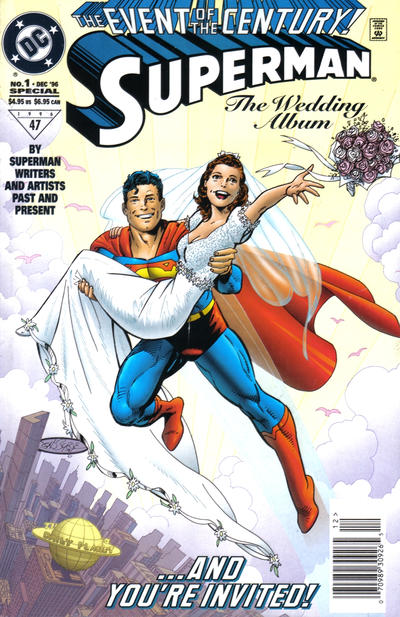 Clark Kent and Lois Lane got married, an event comics fans had been anticipating for 60 years.

Superman: The Wedding Album was published during the week of October 6, 1996, coinciding with an episode of the television series Lois & Clark: The New Adventures of Superman that also featured the wedding of the two characters. Nearly every major comic artist who’d ever worked on Superman contributed to the book.

Of course, nowadays, Clark and Lois are no longer married, as post-Flashpoint they have been exposed to the Anti-Marriage Equation (only slightly less expensive than a Vegas divorce) and they aren’t even dating. It seems to be contagious, as Barry Allen and Iris West have also been exposed to it as well.

But we’ll be able to buy a new wedding issue in… 45 years. Of course, by then comics won’t be printed on paper anymore, but it’s the thought that counts.