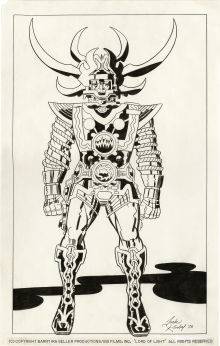 After over thirty years, we now have a release date for what could be the surprise comic-tie in movie hit for next year’s San Diego Comic-Con.

Warner Bros has set September 14, 2012 to send out its Ben Affleck-directed hostage drama Argo. Affleck stars alongside Alan Arkin, Bryan Cranston and John Goodman in the true story of a covert CIA operation to resuce six Americans trapped in Iran during the 1979 hostage crisis.

So what, you may ask, is the comic book connection in a real life story? No, it’s not Argo City…

In 1979 it was announced that Roger Zelazny’s Lord of Light would be made into a film. Jack Kirby and Mike Royer were contracted to produce artwork for sets and costume design. Due to legal problems the project was never completed, but parts of the unmade film project, including the script and Kirby’s set designs, were used as a cover for a CIA exfiltration team for six US diplomatic staff trapped in Tehran in the Canadian embassy. The team had a version of the script, renamed to Argo; they pretended to be scouting a location in Iran for shooting a Hollywood film from that script.