PRO SE PRESENTS FOR OCTOBER-AN EPIC NOVELLA BY AN AUTHOR OF EPICS!

Never before in print, THE HUNTER ISLAND ADVENTURE features characters from Reinagel’s INFINITE HORIZONS Universe and his PULP HEROES trilogy.  “Infinite Horizons,” according to Reinagel, “explores the secret lives and revealing the unrecorded adventures of the greatest heroes and villains to ever walk the Earth.


“In the worlds of Infinite Horizons, the question is explored, what if the Victorian and Pulp era adventures actually occurred in our universe. And taking into account all of the events that have happened since that time, how would this have altered the pulp heroes from the 30’s and 40’s? The answers to these questions are presented in the first trilogy of Infinite Horizons novels entitled Pulp Heroes.

“Pulp Heroes is an epic adventure, spanning two centuries in time and linking the incredible lives of history’s most popular Victorian Age adventurers of the 1800’s with the greatest action heroes of the Pulp Era and an assortment of well-known, real-life figures.”
THE HUNTER ISLAND ADVENTURE is a story about Pam Titan, Doc Titan’s cousin and an adventurer in her own right, and three associates who end up on a wild adventure all their own.  Although available in ebook form, this will be the first time that the story has appeared in print.
“We are more than honored,” Tommy Hancock, Editor in Chief of Pro Se Productions says, “to be the home for Wayne’s novella.  Known for his epic storytelling and adventures that span decades, even centuries, full of his own creations as well as reinterpretations of real historical figures and literary characters, Wayne also proves he’s extremely capable in telling gripping tales in a short form.  And you an find out how capable in PRO SE PRESENTS #3 in October.”
More information will follow as the release date nears for PRO SE PRESENTS #3 in October! 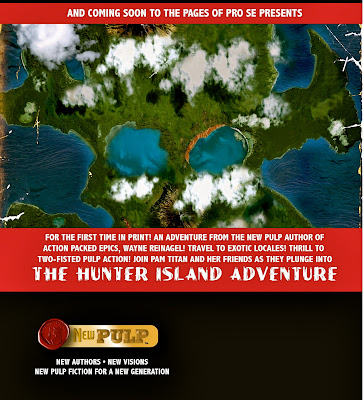