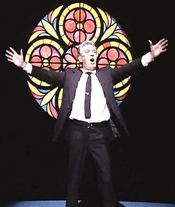 This weekend includes at least three elements: the Jewish holy week between the New Year and the Day of Atonement, the weekend, and 24-Hour Comics Day.

I note that first part just in case somebody reads this to my mother. Hi, Mom!

24-Hour Comics Day  was created by Scott McCloud and it is exactly what the name implies: comics creators get together in local conclaves (not autoclaves; that’s a completely different thing) “to create a 24-page comic book in 24 continuous hours.” It’s sort of a tribute to the days of yore when a creator would get an emergency over-the-weekend assignment and get a bunch of friends together to write, pencil, ink, letter and color the entire book over the weekend, deliver it on Monday, and hopefully get paid for their effort.

Of course, way back then comic books ran 64 pages – 48 pages after World War II hit speed. But today we’ve got to do all those poster shots and, you know, backgrounds and stuff so we’ll ignore the drop in pages.

It’s enormous fun for participants and observers, kibitzers (Hi, Mom!) and hecklers. Since the last thing these 24-hour comics creators need is the sabotage of an admittedly grossly talented editor, I’m going to drop by Challengers Comics and Conversation in Chicago (1845 N. Western Avenue, about a block south of the Blue Line Western Avenue L stop) to do what I do best: mooch food and annoy people. There will be about 25 creators creating, fulfilling the “Comics” part of Challengers’ name, and plenty of kibitzers to meet the “Conversation” part. It all starts at 11 AM Saturday; I’ll probably wander in around 1 or 2 PM after everybody gets down to the hard work. But enough about me.

The type of creativity and camaraderie shown at 24-Hour Comics Day is the lifeblood of this medium. It’s been there since day one when young fans of pulp writing, science fiction and newspaper strips got sought out employment in the new form. Everybody in the biz was a kid back then; Jerry Siegel, Joe Shuster, Bob Kane, Jerry Robinson, Joe Kubert, Gil Kane and many, many others weren’t old enough to get their driver’s license when they started out in comics.

This sort of enthusiasm endures to this day. I love going to “independent comics” shows such as MoCCA in New York just to soak in all that energy and see where the young creative spirits are wandering. Plus, I’m working on that incubus thing.

It’s pretty busy, so you’re trying to break into the racket 24-Hour Comics Day probably isn’t the place to schlep (Hi, Mom!) your portfolio. Call ahead to see if your local venue is receptive to walk-in presentations. However, it’s a great place to see how it all happens, how it’s put together, what people use as their tools (yeah, I know, laptops and iPads) and network. Not the Howard Beale type; you know what I mean.

Many venues are doing 24-Hour Comics Day in association with a local or national non-profit group, and that’s great – particularly in these troubled times. But, really, giving young and new creators the opportunity is a great thing in and of itself. Helping out, even by simply attending and hanging out (although buying a few comics would be swell) is a great thing as well. As we Ashkenazi-Americans like to say, it’s a Mitzvah.