Coming in October from Marvel Comics. 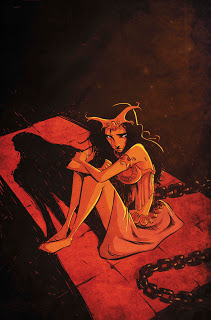 Based on the Novel by Edgar Rice Burroughs
Adaptation by Roger Langridge
Art by Filipe Andrade
Cover by Skottie Young
The comic-book adaptation of Edgar Rice Burroughs’ tale continues! See John Carter meet the beautiful but deadly Princess Dejah Thoris! Watch him make a dangerous enemy! And discover the fate of those who dare to cross the Martians, when Carter takes the life of a Thark warrior! The world of Barsoom continues to unfold in this brand new interpretation of a great classic.
32 PGS./All Ages …$2.99 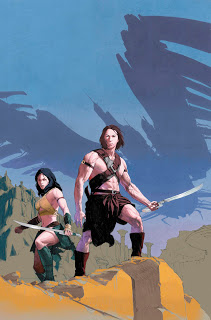 JOHN CARTER of Mars: world of mars #1 (of 5)Based on the Novel by Edgar Rice Burroughs
Written by PETER DAVID
Art by LUKE ROSS
Cover by ESAD RIBIC
If you thought all the action on Mars began with the arrival of John Carter—are you in for a shock! John Carter: World of Mars is the official prequel to the upcoming Walt Disney Pictures blockbuster film releasing March 2012 and reveals the shocking events that transpire before the hotly anticipated motion picture! Plus it features some of the greatest characters ever conceived by Edgar Rice Burroughs, including Princess Dejah Thoris, the valiant, four-armed Tars Tarkas, John Carter and Burroughs himself!
Dejah Thoris has yet to meet the love of her life, but she has her hands full with the malicious Sab Than, would-be ruler of Zodanga, who sees kidnapping the princess of Mars as a short-cut to winning the thousand year war between his people and her city of Helium. Meanwhile Tars Tarkas is not yet the leader of his people, but instead an unambitious warrior who is caught between the desires of the female he loves and his best friend who needs Tars’s help to become Jeddak of the Tharks…assuming that his ambitions don’t kill them all. It’s a compelling tale of romance, court intrigue and an unending war on a distant world. Take an unforgettable journey to Barsoom. It’s a trip you can’t afford to miss!
32 PGS./Rated T+ …$3.99 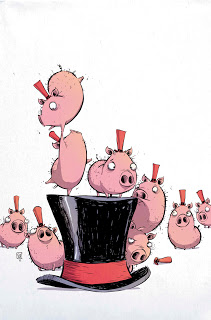 DOROTHY & THE WIZARD IN OZ #2 (Of 8)Written by ERIC SHANOWER
Art & Cover by SKOTTIE YOUNG
The Wizard of Oz is back and the Mangaboos have him! These deadly vegetable people also have Dorothy, her cousin Zeb, their horse Jim and kitten Eureka. To save their lives, the humbug Wizard must win a contest of magic against a real Sorcerer—using only his wits and nine tiny piglets. The beloved Oz adaptation continues with the critically acclaimed and Eisner Award winning team-up of Eric Shanower and Skottie Young.
32 PGS./All Ages …$2.99 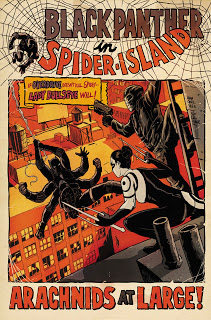 BLACK PANTHER: THE MOST DANGEROUS MAN ALIVE #524Written by DAVID LISS
Pencils & Cover by FRANCESCO FRANCAVILLA
SPIDER-ISLAND TIE-IN!
First it was American Panther, now it’s…Six-Armed Panther? The arachnid infection griping Manhattan hits T’Challa, but that doesn’t mean he’ll stop trying to protect Hell’s Kitchen! And when Overdrive breaks into the quarantine zone, your friendly neighborhood Spider-Panther swings into a deadly race across the streets of New York City. What has the Spidey villain stolen that’s worth smashing through a hero-protected border, and why is the lethal Lady Bullseye trying to keep him from getting back out?
32 PGS./Rated T+ …$2.99 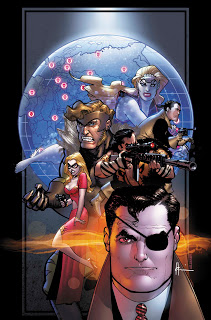 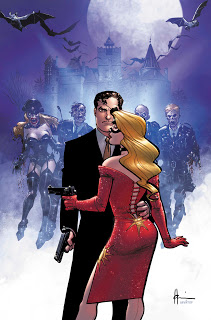 AVENGERS 1959 #1 & #2 (Of 5)Written and Penciled by HOWARD CHAYKIN
Cover by HOWARD CHAYKIN
EXPLODING FROM THE PAGES OF NEW AVENGERS…
It’s the tail end of the fabulous fifties. NICK FURY and his AVENGERS roar into their secret mission, hunting down NAZI SUPER VILLAINS…men and women relentlessly preparing to unleash hell on a troubled world barely holding onto peace…only to find the Avengers have what appears to be serious competition in their manhunt for these escaped ubermenschen…when their mission is suddenly compromised by interference from an unlikely source.
32 PGS. (each)/Rated T+ …$2.99 (each) 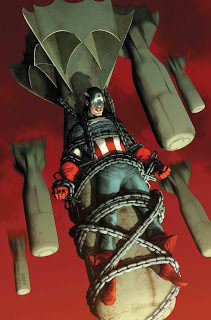 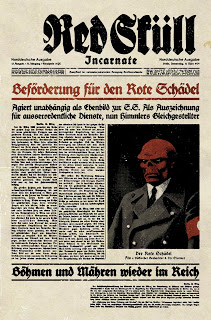 RED SKULL #4 (of 5)Written by GREG PAK
Art by MIRKO COLAK
Cover by DAVID AJA
The life of Johann Schmidt has been a tragic, tortuous road. As his destiny and doom drag the future Red Skull to his inevitable crossroads, Johann plots a shocking assassination…one that could change the course of history… By the acclaimed writer of MAGNETO: TESTAMENT, Greg Pak, and the breakout SECRET WARRIORS artist, Mirko Colak
32 PGS./Parental Advisory …$2.99 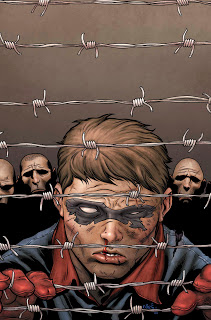 CAPTAIN AMERICA AND BUCKY #623Written by ED BRUBAKER & MARC ANDREYKO
Penciled by CHRIS SAMNEE
Cover by ED McGUINNESS
Behind enemy lines! Bucky and Cap have faced the horrors of war on many fronts, but this issue, they go further into the depths of evil than our young heroes realized possible. And what is the secret that connects the Cap and Bucky series to the modern day stories – the clues begin to add up this issue, as Brubaker, Andreyko, and Samnee keep the pedal to the medal.
32 PGS./Rated T+ …$2.99 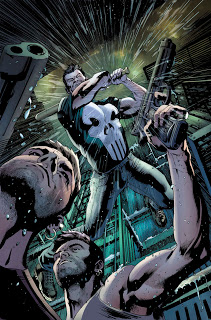 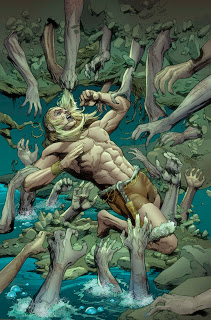 KA-ZAR #5 (Of 5)Written by PAUL JENKINS
Pencils & Cover by PASCAL ALIXE
The Pangean people confront their utmost limits as the calamity in the Savage Lands hits its critical apex. Corporate oil has seeped throughout the jungle and children perish from foreign remedies. Now two battles erupt that will ultimately decide the fate of Pangea. One man stands alone in the austere chambers of the United Nations, while one nation must finally rise against the threat from within. Amidst the bloodshed, can Ka-Zar protect the integrity of the land and people he swore to? Or will exploitation and internal strife ensure the destruction of his beloved home?
32 PGS./Rated T+ …$2.99 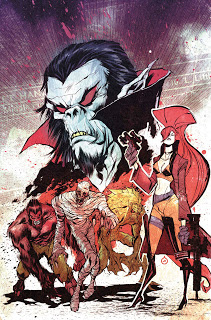 LEGION OF MONSTERS #1 (Of 4)Written by DENNIS HOPELESS
Art & Cover by JUAN DOE
A monster adventure to scream over!
Elsa Bloodstone hates monsters – and when the trail of a mysterious serial killer leads to their underground city, Elsa’s ready to kick some horrific butt. Morbius the Living Vampire, Werewolf by Night, the Living Mummy and the slithery Manphibian have news for her, though; the monsters are innocent, and the real killer is out there…a creature so terrifying and vicious that even monsters are scared to death! Elsa Bloodstone and the Legion of Monsters are on the case!
32 PGS./Rated T+ …$3.99 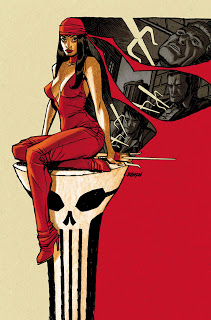 PUNISHERMAX #18Written by JASON AARON
Penciled by STEVE DILLON
Cover by DAVE JOHNSON
The Punisher is at his lowest point. Homeless, penniless, gun-less. But none of this changes the fact that he’s got his sights aimed squarely on the most powerful man in the country: the Kingpin of Crime. Fearing for his life and paranoid, the Kingpin brings in a new bodyguard, the best money can buy: a hard-as-nails woman going by the name of Elektra.
32 PGS./Explicit Content …$3.99 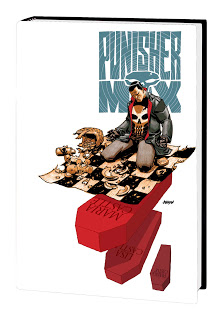 PUNISHERMAX: FRANK PREMIERE HCWritten by JASON AARON
Penciled by STEVE DILLON
Cover by DAVE JOHNSON
His final confrontation with Bullseye left Frank Castle wounded and reeling in more ways than one. Now confined to a prison hospital bed, Frank must begin the long painful process of healing — not just his broken body, but also his horribly scarred soul. To do that, he’ll have to face the darkest secret of his past — one he’d hoped would stay buried forever. Collecting PUNISHERMAX (2010) #12-16.
120 PGS./Explicit Content …$19.99
ISBN: 978-0-7851-5208-8
Trim size: standard

For a full listing of Marvel’s October Release, visit them at http://www.marvel.com/.