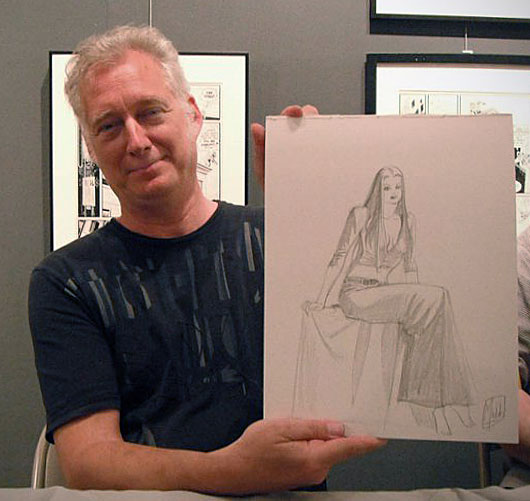 Renee Witterstaetter passes on the sad news that Minck Oosterveer, a Dutch artist best known in this country for his work on The Unknown for BOOM! and Ruse for Marvel, was killed on September 17 in a motorcycle accident. He was 50.

Born July 19, 1961, he grew up in The Netherlands with European comics, but was soon more interested in American comics, especially the newspaper comics of the 1930s-50s. The pulp-ish, direct style and the usage of black and white in the realistic artwork of Milton Caniff, Alex Raymond, and Will Eisner attracted his attention, although he also showed a Herge style in some of his more cartoony work. After working for a studio on productions like ‘Tom & Jerry’, ‘Sesame Street’, ‘Paddington’, ‘Ovide’ and ‘Spider-Man’, Minck moved in the direction of another stylistic forte, working with Willem Ritstier on the series ‘Claudia Brücken’ for the franco-belgian publishing-house ‘les editons Lombard’ and Tintin-magazine . Minck also became known for ‘Jack Pott’, ‘Zodiak’, ‘Rick Rolluik’, ‘Arachna’, ‘Excalibur’, ‘Nicky Saxx’ (pictured above in a picture to benefit MoCCA), ‘Storm’, and ‘Ronson Inc.’.

Minck Oosterveer debuted in American comics with Zombie Tales for BOOM! Studios. He’s best known in the US for his collaborations with Mark Waid on The Unknown for BOOM! and Ruse for Marvel.