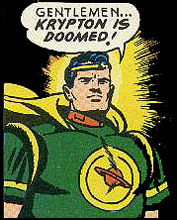 When Jerry Siegel first conjured up Superman, some time in 1934, he really didn’t tell us much about the Man of Steel’s doomed homeworld. We were informed that it exploded and that only baby Kal-El survived the big bang because his father, Jor-El, shot him into space in a prototypical spacecraft which, for reasons not really explained, had room for only one subsize occupant. This was after Jor-El had appeared before some governing body or other and warned of impending doom, and was ignored.

Not a lot of information there. For openers, we might ask where, exactly, Krypton was located. I’m betting that Jerry had our solar system in mind, and why not? In the early 30s, not even degree-bearing scientists knew their way around our sun and its planets, much less a kid from Cleveland. If Jerry were doing his creation today, he might mention alien stars, or distant galaxies, and worm holes and space/time warps, and then he’d have to explain how someone so far away could know about Earth and an ecosphere capable of sustaining Kryptonian fauna. (Or maybe he’d just ignore the whole question. If so, he’d get no scolding from me, my friend.)

Jerry gave no hints about Kryptonian socio-politics, geography, religion, or customs. We don’t even know if the planet had any moon(s). Nor do we know why Jor-El was the Kryptonian version of Cassandra. (Remember Cassie, from Greek myth? She could foretell the future but was cursed to have nobody ever believe her.) Lately, I’ve been wondering if Jerry was himself a prophet, albeit of the accidental variety.

We begin with raw speculation, but, not having information we can be forgiven for trying to fill in a few blanks ourselves. Let us, then, suppose that at the time of Jor-El’s Cassandra number, the Els had been recently removed from office – the Els being, or course, the legislative clan Jor belonged to. They were replaced in the chambers of Krypton’s odd government by their age-long rivals, the Les. (Long “E.”)

Among those who scoffed at Jor:

Chain-Le: Chain was an industrialist-turned-politician who saw an opportunity to enrich himself and his cronies by blaming the symptoms of impending doom on secret weaponry unleashed by another nation and having war declared on these presumed enemies.

Rev-Le: Rev was a clergyman who said that according to scripture, the world wasn’t supposed to end until half-past the next millennium and so, not only was Jor wrong, he was a heretic who should be stoned.

Iggy-Le: Iggy was another politician who thought these scientists, like Jor, were just a bunch of snooty eggheads who ought to be ignored, though Iggy thought that maybe Rev-Le had something with that stoning notion.

Geo-Le: Geo, the most powerful official in the legislature, didn’t actually join in the condemnation of Jor because Geo was a puppet. It seems that ancient and ill-understood Kryptonian custom allowed hand puppets to occupy the position of head-of-state if the electoral process somehow became hopelessly subverted. The only explanation for this anomaly was written in a long-dead language and has been translated as: Why not?

We could possibly go on but…hey – is it just me or is it globally warm in here?