Derrick Ferguson Hunts Down The EXILES OF THE DIRE PLANET! 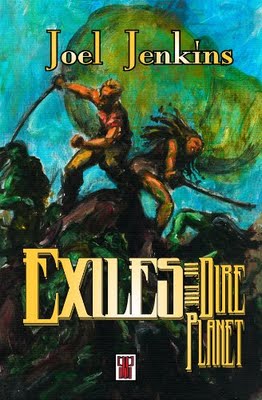 ·  Paperback: 256 pages
·  Publisher: PulpWork Press; 1ST edition (September 15, 2009)
·  Language: English
·  ISBN-10: 0979732921
·  ISBN-13: 978-0979732928
When last we saw Garvey Dire, he was doing pretty well for himself.  Oh sure, his mission to Mars had gone wrong, leaving him near death.  But then he was miraculously transported 47,000 years into the past.  And in that past, Mars is not a dying planet.  Indeed, it thrives with life including the Muvari tribe which is mostly populated by warrior women.  The males of the tribe are few and are guarded as they assure the continued survival of the tribe.
Garvey survives a number of harrowing adventures to rise to a level of prominence in the Muvari tribe as well as marrying the gorgeous and deadly Ntashia, the finest swordswoman of Mars.  Garvey even managed to prevent World War III back on Earth in his native time period and save the life of his best friend.  Salt-N-Pepa could very well have been talking about Garvey in their song “Whatta Man”
When we catch up again with Garvey Dire he’s facing an army of Galbran.  They’re a rival tribe of cannibals who have an old score to settle with Garvey and an older one to settle with the Muvari.  And while he’s trying to hold off this army in a remote outpost with but a handful of Muvari warrior women, he’s also trying to figure out how to handle the Muvari custom of a man having more than one wife.  It’s not as hard one might think since his first wife Ntashia has made the arraignments for the marriage and is actively encouraging it.  It’s custom, y’know and when on Mars, do as the Martians do.
It’s almost a relief for Garvey to discover that his old rival and fellow Earthman Arnold Stechter survived the events of “Dire Planet” and is alive and well.  He’s lost his memory of his life on Earth and doesn’t recall that he and Garvey are bitter enemies.  But Stechter hasn’t forgotten his ambition and desire for power.  He has gathered together outcast warrior women from a dozen different tribes and forged them into a savage, bloodthirsty army.  And with these EXILES OF THE DIRE PLANET he intends to conquer and rule Mars.  But it’s a plan that has to begin with the overthrow of Ledgrim, the hidden Muvari capital city.  And it’s Garvey Dire who will unwittingly help Stechter achieve that goal…
If you’ve read and enjoyed “Dire Planet” then you’ll certainly want to read the sequel.  Not only does Joel continue to explore and reveal new layers of his Martian culture but he also gives us new layers of his protagonist.  Garvey’s naturally hesitant about entering into another marriage when he’s already got a wife he’s perfectly happy with.  Garvey Dire exhibits more maturity in this multiple marriage thing than you would expect from a hero in this genre.  Garvey’s still learning his role and place in this world and he sometimes wishes things would go a little slower.
One thing he’s not slow at is facing down the hoards of enemies thirsting for his blood in this one.  If this book doesn’t have the highest body count of any of Joel’s books, its right up there in the top three.  Just the first fifty pages of the book has a higher death rate than most complete novels.  And this is before Garvey finds out about Stechter and his army of exiles.
EXILES OF THE DIRE PLANET is an enjoyable book but a demanding one.  Joel seems determined to give readers more bang for their buck and while he certainly does that it also means that there’s a lot more you to pay attention to attention to and keep track of.  The only complaint I have with the book is that in order to get in as much information as he can, Joel will occasionally have characters explain some aspect of Martian life and culture to Garvey, even during scenes where it seemed to me that concerning themselves with surviving whatever is trying to kill them should be of paramount importance.  Also there’s the character of Naegrik the Galbran.   While he provides Garvey with a sidekick who’s just as much of an outsider as he is, Garvey’s acceptance of his conversion from full-blown cannibalism to bosom buddy and lifelong pal is a bit too quick for my taste.  I liked how the other characters kept an eye on Naegrik when he was around and constantly reminded Garvey that hey, this guy grew up eating people.
But the main thing here is the adventure and Joel delivers it with great style and tight control over the half dozen subplots he’s got going.  And EXILES OF THE DIRE PLANET ends with a cliffhanger that will demand that you get the third book in the series; “Into The Dire Planet” to find out what happens next.  And for my money that’s exactly what Pulp, whether Classic or New is supposed to do.  Enjoy.
For more information about Joel Jenkins please visit:
The Vaults of Caladrex  http://www.joeljenkins.com/
Pulpwork Press   http://www.pulpwork.com/
And Joel has kindly provided a Dire Planet Compendium that you can find at The Vaults of Caladrex if you go to the right side of the blog and scroll down until you hit the keyword ‘Dire Planet Compendium’
Share