I hope you’ve been saving up your milk money for next month because that’s when FOUR BULLETS FOR DILLON will at last be available from Pulpwork Press.  The exact date will be announced soon.  But in the meantime, here’s something for you to look forward to.  A little something to sweeten the deal, so to speak.
First, some history: back in 2005, those of us who were writing for FRONTIER got the bright idea to produce a comic book: FRONTIER PUBLISHING PRESENTS.  And after a lot of hard work and sleepless nights, the first and only issue was published.  And in that comic book were some fine stories produced by;
Trevor Carrington
Shelton Bryant
Mike McGee
Tamas Jakab
Michael Exner III
Gentlemen all!
FRONTIER PUBLISHING PRESENTS #1 also had as the lead story a 10 page story scripted by Russ Anderson, based on a story written by Yours Truly and masterfully illustrated by Alex Kosakowski; “Dillon and The Escape From Tosegio”  The original prose story is included in FOUR BULLETS FOR DILLON.
But I wanted to give folks a chance to read the comic book story as there’s no way to buy a copy now.  I’ve got about a dozen issues of FRONTIER PUBLISHING PRESENTS and quite honestly, I don’t want to part with them.  But occasionally I do get emails from Dillon fans who want to read the story and I don’t blame ‘em.  It’s a good one.  Russ and Alex did a helluva job.
So here’s what I did: I scanned the 10 page story and here’s my offer plain and simple: you buy a copy of FOUR BULLETS FOR DILLON and email me proof of purchase (DerrickFerguson1@aol.com) and in return, I send you the illustrated “Dillon and The Escape From Tosegio.”  Sounds fair to you?
And naturally I expect that you want a look at what you’re going to be getting so here’s a preview: the first two pages of “Dillon and The Escape From Tosegio” 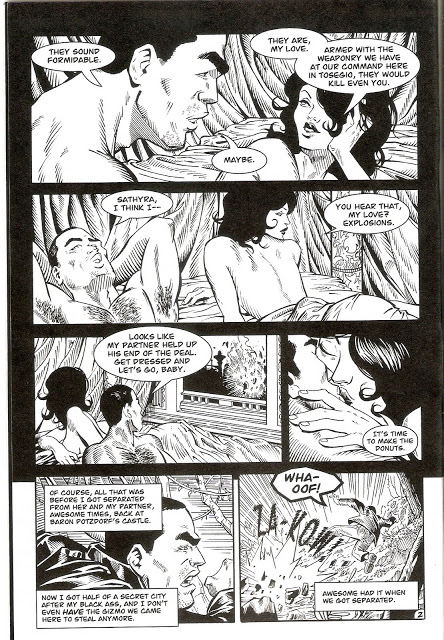