MARTHA THOMASES: The DC (And NY And LA) Implosion 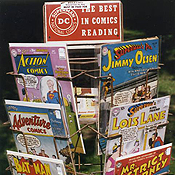 There used to be ten comic book stores within a mile of my apartment. Now, there are two.

Most of the comic book stores near me closed in the early 1990s, when the direct market imploded. Speculators stopped buying, and there simply weren’t enough reading fans to support so many stores. With bookstores, the same kind of competition had an effect. Instead of speculators, bookstores suffered from Internet offering lower prices and free delivery. More recently, the success of Kindles and other e-readers means that fewer readers are buying physical books.

Comic fans have been reading comics online for years. You, yourself, can read comics – for free – on this very site. It’s possible to illegally download comics you’d otherwise have to pay for, through a process I’ve always thought was too complicated to bother with. Also, I don’t mind artists and writers getting paid.

Starting next month, DC Comics will offer readers the chance to buy comics digitally at the same time (and at the same price) they are available in stores. Naturally, comic book stores are less than thrilled about this.

This is a long and winding way to get to my rant.

Look, I love comic book stores. I remember before there was a direct market, when one had to go to a drugstore or a newsstand to get a fix, and there was no guarantee that the comics you wanted would be in the shipment. Having dedicated comic book shops (at least in New York City) meant that I could always find the books I was looking for, and also maybe stumble upon something I didn’t know I’d like.

At the same time, comic book stores (and the people who work for them) can be incredibly frustrating. When I worked at DC Comics in the 1990s, it seemed to me that some comics retailers wanted all kinds of special privileges not afforded to other classes of trade. They wanted to get their books earlier than other outlets. They wanted to get graphic novels earlier than bookstores. They wanted to know what was going to happen in storylines earlier and earlier, so they could spoil the endings for their customers and feel like big shots (they said it was so they would know how much to order, but somehow, even the most top-secret plot developments leaked). They wanted to be the only class of trade eligible for co-op advertising.

Perhaps it would have been worthwhile to accede to their requests if they had been willing to negotiate in other areas. For example, perhaps they could have agreed to promote our comics more aggressively, or stock the line more fully. That didn’t happen.

Perhaps that’s one reason there are so many fewer comic book stores in my neighborhood, and around the country.

A few of the retailers mentioned in the article I cited above are angry that DC is not continuing to treat them as an exclusive market, the only place fans can read comics. While there are some good ideas for way they can participate in sales (gift cards!), I don’t understand why they think their concerns trump DC’s desire to reach as many readers (and paying customers) as possible.

While I love my [[[Kindle]]], I haven’t warmed to digital comics in the same way. Even with my iPad, I prefer reading paper copies. I like the sensation of turning the page when there is a cliffhanger. If that makes me a dinosaur, I’m cool with that.

Dominoed Dare-Doll Martha Thomases is going to see Twik tonight at the Del Close Marathon and you should, too.