Reviews from the 86th Floor: Barry Reese looks at Phantom: Guardian of the Eastern Dark 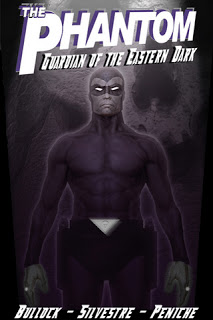 GUARDIAN OF THE EASTERN DARK

This heavy tome collects the entire 12 issue run of Moonstone’s second ongoing Phantom series. All issues are written by Mike Bullock while Silvestre Szilagyi handles the art on what was originally issues 1-3, 5-6 and 8-12. Fernando Peniche is the artist on issues 4 and 7.

If you’re a fan of The Phantom, then you’re probably already aware of Bullock’s contributions to the character. He was the primary writer of The Phantom during the character’s time with Moonstone and he peppered his stories with real-life issues related to Africa. This collection is very much a sequel to Bullock’s work on the first Moonstone Phantom series, as it brings back one of his greatest creations, the villain known as Him. Indeed, the entire 12-issue arc is based around Him’s return and the various ways that he manipulates The Phantom. The stories are fast-paced and action-packed, featuring The Phantom in a number of dramatic situations… he even battles a polar bear towards the end!

The artwork is serviceable — Szilagyi is a good storyteller though his style lacks some of the flair that would help set the stories apart. He seems to come from the lineage of guys like Don Heck: draftsman who know how to clearly lay out a page and can hit all the required notes but there’s not any pages here that scream “Boy, I wish I could get that one as a poster!” Peniche is a far more dramatic artist but has some wonky anatomy and layouts at times.

If I had any criticism of the storyline as a whole, it would be that there’s little downtime for The Phantom. Diana is very much a background figure in the series and Kit and Heloise do show up for a couple of drama-inducing pages but I would have enjoyed seeing an issue somewhere in the run where The Phantom would have spent more time with his family: I think mixing in a “small” story amidst the proceedings would have made the final chapters have more power. As it is, readers are required to already have feelings for the kids and understand The Phantom’s devotion to his family — there’s not really much in the way of explaining that to new readers along the way.

I consider this book well worth the money and it should be of interest to any Phantom fans. I will say that my favorite Bullock storyline is collected in The Phantom: Checkmate and it serves as an excellent lead-in to this volume, since it also features Him. Get ’em both, if you haven’t already.