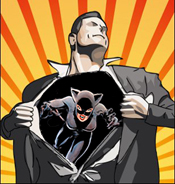 …Or How The Fuck Did That Happen, Part Two

Where was I last week?

I was in the midst of a great crusade against the most terrifying villain ever unleashed upon the universe. A tyrant created by an evil greater than Mephisto – or Emperor Palpatine or Darkseid, choose your poison – whose sole purpose is to destroy humanity. A crafty, insidious, and totally nasty piece of work, capable of twisting even the greatest brains ever known – Einstein, Newton, Hawkings, Reed Richards – into Roquefort cheese, of destroying REM sleep, of chaining even the raging Incredible Hulk to a chair for weeks.

Who is this creature from which Doctor Doom hides in the blackest caves of the deepest forests of Latveria? Who is this monster that chases Galactus through the Andromeda galaxy? What is this, this thing, which sends Doomsday scurrying for his Mommy?

And though in the end I was bloodied and broken, I triumphed.

So where was I?

I had found some typewriting paper in a drawer. I had pulled my old portable manual out from underneath my bed, where it has been collecting dust bunnies for I-couldn’t-remember-how-long. I had gotten a paper towel and some Windex and had wiped off the keys. I had prayed that the ribbon was still good. I had rolled the paper in. Had set the margins.

“Writing is easy,” Red Barber said. “You just open your veins and bleed.”

I slit an artery that day, because I bled like a stuck pig.

In a few hours, I had written a little story about a young couple expecting their first child. They were scientists – aren’t they always? – working in the then infant field of genetic research. There’s an accident at the lab – isn’t there always? – and the woman, exposed to a mixture of chemicals and radiation – isn’t she always? – gains super-powers. (Duh!)

But there is a price. She loses the baby. And estranges her husband.

I mailed it off. (Snail-mail. Remember, this was 1983, and I was writing on a portable typewriter. With carbon paper!)

A week later I got a call from Sal Amendola, the coordinator of the talent search for DC. A month later I was sitting at the desk of Karen Berger, who was then the editor of the comic that would present all these stores, appropriately titled New Talent Showcase.

Karen and I talked for a while. I remember her asking me about my background, and like Sergeant Schultz from Hogan’s Heroes, my answers were all I know notzhing! I see notzhing! The only thing I could really tell her is that I read comics. Always did. She sketched out the process of putting a comic together. Explained the full-script method – in which the entire story, including dialogue, panel layout and specific “shots” – is dictated by the author, and “Marvel style,” in which the writer does a detailed synopsis of each page, but basically leaves all artistic decision to the artist.

One thing I do remember very clearly – a man comes into Karen’s office. She introduces me. His name is Len Wein. Obviously an important person. Clearly as a comics reader I’m supposed to know him. But my inner dialogue is I’m supposed to know him? Len Wien. Len Wein. Sounds kinda familiar. Why do I know that name?” Meanwhile I’m shaking his hand and saying things like, “I’m so pleased to meet you,” and “I love your work,” and “It’s an honor.”

Anyway, Karen sent me home with a stack of old comic scripts to “study,” and with instructions to take a swack at it. (My words, not hers.) And here let me say, very clearly, that any success I’ve had in comics is thanks to Karen, who nurtured me and encouraged me and was the best editor (and friend) a tyro like me could ever have. It was Karen who had faith in any untapped abilities I had, who championed and gave me the opportunity to write more stories for New Talent and to work with people like Paul Levitz (The Legion Of Super-Heroes) and Keith Giffen (Legionnaires Three, Amethyst).

And when Wonder Woman was finishing up her run in preparation for George Pérez’s relaunch, though I have no proof of this, I really believe it was Karen who “whispered” my name into executive editor Dick Giordano’s ear, which led to an assignment on the Amazon Princess. (Believe it or now, it was until years later while talking to Trina Robbins that I found out I was the first woman to scribe Diana of Themyscira’s adventures.) And later, I was blessed to find myself working with George Pérez himself on Wonder Woman, a time that will always be remembered by me as one of the best experiences of my professional comics writer life.

And for whatever reason, other people noticed. ComicMix’s own Bob Greenberger gave me an assignment on V, and later edited my Lois Lane mini-series. Len Wein – he whom I faked knowing that fateful day – asked me to write a Tales Of The Green Lantern Corps. And then I worked with Denny O’Neil – doesn’t he have a column here, too? – creating the first Catwoman mini-series.

All in all, for about ten or twelve years I actively wrote or worked in comics. I stopped because, well, life and shit happens. Just as there had been thrills and highs, there were disappointments and lows. But as my father, a World War II fighter jock who piloted P-40’s and the ultimate flying machine, the legendary Mustang P-51 in the China-Burma-India theatre, first as part of the Flying Tigers and then its successor, the Dragonfly squadron, flying cover for Merrill’s Marauders and strafing the Japanese railroad – yep, he has pictures of the real Bridge Over The River Kwai – once told me at a time in my life where just getting out of bed was an ordeal, “When you’re lost from your squadron and you’re shot up and leaking hydraulic fluid, all you can do is open the throttle all the way and keep your nose up in the air.”

‘Cause you never know when you’ll be able to look back and say, “I may not know how that fuck that happened, but, man, I’m so glad it did.”