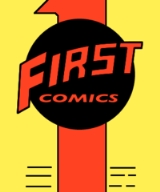 Before the panel starts at San Diego Comic-Con, we hope somebody addresses the issues of potential for confusion in the marketplace and possible violation of trademark.

To start, we have First Comics. First Comics was a publisher co-founded by ComicMix’s own Mike Gold in 1983, notable for series like GrimJack, Jon Sable Freelance, Nexus, Badger, Whisper, Dreadstar, Shatter, Munden’s Bar, Classics Illustrated, and American Flagg! It published early work from John Ostrander, Timothy Truman, Norm Breyfogle, Mike Saenz, Mike Baron, as well as the first color appearance of the Teenage Mutant Ninja Turtles. It went out of business in 1991, and has published nothing in the twenty years since. Some of the series previously published by First have found their way to being published elsewhere, including ComicMix publishing GrimJack, Jon Sable Freelance, and Munden’s Bar.

It has been announced that will be a panel at this year’s San Diego Comic-Con heralding the second appearance of First Comics, which will be starting in a few minutes.

And speaking of second, we have First Second Books, a publisher of graphic novels, and an imprint of Holtzbrinck Publishing Group, one of the largest publishers in the world. Since it started publishing in 2006, First Second has published a number of acclaimed titles including the Eisner and Harvey Award winning [[[American Born Chinese]]] by Gene Luen Yang, The Black Diamond Detective Agency by Eddie Campbell, [[[Tiny Tyrant]]] by Lewis Trondheim and Fabrice Parme, [[[Life Sucks]]] by Jessica Abel, Gabe Soria, and Warren Pleece, [[[Little Vampire]]] by Joann Sfar, and Drawing Words and Writing Pictures: Making Comics: Manga, Graphic Novels, and Beyond by Jessica Abel and Matt Madden. They’re up for four Eisners this year.

Then just to add to the confusion, we have First Comics News, which has been running for a little over a year, and which is using a logo that’s very similar to the original First Comics one.

Incidentally, I’d link to First Comics as well as the other two publishers, but they don’t seem to have a web site– for that matter, they don’t even seem to own the domain: firstcomics.com is for sale for just under $2000. The current owner has had it since 2007, but since First Comics hasn’t published anything in that time, they will have a very hard time getting it back under domain squatting rules since they haven’t done anything to hold onto the trademark. It’s a bit surprising, considering the way the industry has been stampeding to digital, that this hasn’t been locked down yet.

And now we’re hearing whispers that because of the potential for trademark confusion, Diamond will not be carrying their titles– which is not unlike what happened a few years ago when there were two companies laying claim to being the heir and name rightsholder for Valiant Comics.

So with this many potential trademark pitfalls, one has to ask: can the name First Comics be resurrected? Can there be a second First if there’s already a First Second? And where should we go for First Comics news?

We look forward to any answers the panel might provide.