Attention Shoppers: Marvel’s Trying To Pull A Fast One This Week 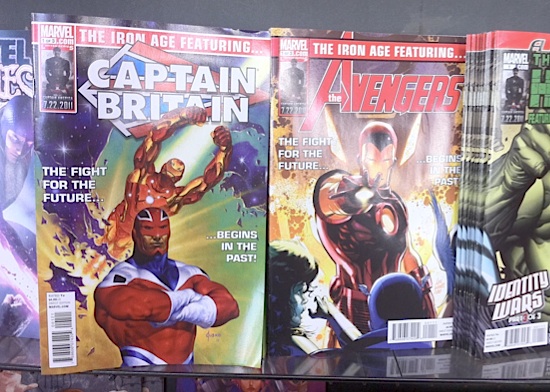 We’ve already heard a few complaints about the two comics racked above.

What’s the complaint? One’s an Avengers book, the other’s Captain Britain. They both look like retro-throwbacks to the 80’s, and they both look like they’re tying into The Iron Age miniseries, right? Okay, they’re a little pricy at $4.99, but–

–wait a minute. Open them up.

These are both covers for The Iron Age #1. The series title is right up there, in that little red bar at the top of the issues. The Captain Britain cover? Marvel is considering that to be a variant cover.

Consider this a public service announcement to help save money in these tough economic times. And the next time somebody behind the counter at your local comic book shop yells at you for looking through the books with the time-honored “This ain’t a library, bub!” you can simply tell them that you have to because comic book publishers are pulling stunts like this.