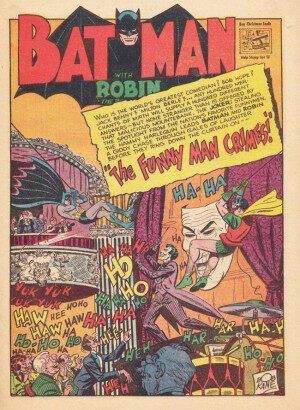 Lew Sayre Schwartz, one of the lesser known Bob Kane ghosts on Batman, died on June 7 at age 84 after a fall according to his son, Andrew. Schwartz began working for Kane as a ghost in 1948 and remained the principal artist under Kane’s name on the Batman features in Batman and Detective Comics until 1953. Art historians believe he produced at least 120 stories during this period.

Kane signed a new deal with DC in 1948 and hired Schwartz to help handle the workload. Schwartz’s work began with penciling the stories, letting Kane do the actual Batman and Robin faces, then ink the lettered pages. Kane was understood to have made frequent changes to the artwork, altering the main heroic figures and secondary characters.

Without benefit of credits in the stories, art experts can usually identify Schwartz work given the detailed backgrounds and his frequent staging of the action that carried less impact than the ones Kane himself composed. Some, including Eddie Campbell, consider Schwartz one of the finest practitioners ever to work for Kane’s shop.

Schwartz toured Korea in the aftermath of the Korean War, visiting the troops and returned feeling he no longer wanted to draw comic book stories. After leaving Kane’s studio, Schwartz went on to teach at what is now known as the School for Visual Arts.  During this period, he also did ghosting work on several comic strips such as Secret Agent X-9 spelling artist Mel Graff, as well as several weeks of The Saint.

In 1961, Schwartz helped form Ferro, Mogubgub and Schwartz which produced live and animated commercials, earning the company four Emmy Awards and six Clio Awards. Schwartz began drawing storyboards and expanded his creative role over time. They may be best remembered for their animated title design work on Stanley Kubrick’s 1964 masterpiece Dr. Strangelove. Schwartz even went on to direct a Barbra Streisand television special. 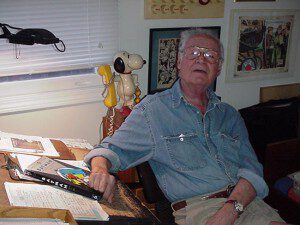 Schwartz even produced a well-received documentary about Milton Caniff in 1981.

Schwartz was eventually discovered by comics fandom around 2002 and he gave numerous interviews recounting his careers and made numerous convention appearances. He told one interviewer, for example, “Well, I got the recognition that I never got in the comics, and so in ‘02 when I was an invited guest to San Diego and got handed an Ink Pot Award by Will Eisner and I must tell you it was a shock. I never expected that. But I had a good 40 some odd years in the film business and it did well by me and I got all the recognition that I didn’t get in the comic business. So strange, you know, what goes around comes around.”

He continued to keep his creative hands busy, producing The Dinosaur Group which saw print from 1988-89 in the Cape Cod-based of The Standard Times. He also wrote, at the behest of the town of New Bedford, Massachusetts, a children’s version of Moby Dick. The 2002 project was illustrated by Dick Giordano whose career began as Schwartz was leaving the field.