Now, where were we…?

Oh yeah. We were discussing continued stories and I was telling you that continued characters have been around a long time, since the classic Greek dramatists at least, but continued stories were a pretty recent phenomena. You might recall my claim that Julie Schwartz and Stan Lee introduced them to comics, but they already existed in radio drama. One form I didn’t mention, but am pleased to do so now, were the “chapter plays” in movie theaters, which I suspect had some influence on the early comics guys. You can probably rent some examples of these at your local video store, but in case you don’t want to bother…

They were continued movies, these chapter plays, also called just plain serials, with a plot that played out over between ten and fifteen installments. Each segment ended with the hero or another sympathetic character in dire trouble, about to plunge over a cliff or be impaled on spears at the bottom of a pit or like that. (Check out the Indiana Jones films, which were partly inspired by the serials, to get an idea of the kinds of scrapes these folks got themselves into.) Then, the segment would end with the suggestion that you come back the following week to learn what happens. The idea was, you, the breathless kid in the front row, would just have to return to witness the good guy’s miraculous escape or, if you were a bit twisted, you hoped you’d watch him get offed. 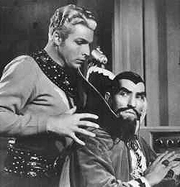 If you have ever suffered through one of my comics writing classes, or were lucky enough to take a Robert McKee film writing course, you know that some professional wordsmiths set a lot of store by structure, and that the most reliable structure is called the three act structure. (For more, and better, on this, see the recommended reading below.) I’m not about to presume to teach a class here, but most briefly – the three-act structure: 1, Something happens to cause the hero to act. 2. The problem gets complicated. 3. The hero resolves the problem.

Obviously, this narrative strategy won’t work for a story that’s stretched out over a whole lot of chapters, with a lot of climaxes, so the serial guys evolved what I call the “one-damn-thing-after-another” structure. Which is: the good guy and the bad guy(s) have a lot of clashes, which end inconclusively until one of them doesn’t. The good guy wins, virtue triumphs, everyone lives happily ever after.

A story doesn’t necessarily need to be multi-chaptered to be one-damn-thing-after-another; you could probably use the construction for a 10-pager. And it’s not necessarily a bad structure; a storyteller with sufficient ingenuity might make it work, though I usually advise students not to try this at home. What, structurally, it has going for it is this: it ain’t dull. Something big and, presumably, exciting, happens at least once per chapter and that keeps things moving.

We’ll get back to this topic next week.