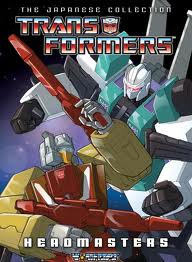 We never quite cottoned to The Transformers in any incarnation but we do recognzie it has a fervent following. We also recognize the following news will be most welcome by diehard fans of the animated incarnation. It certainly will help pass the time until the third feature film is unleashed. Here’s the formal announcement:

This summer, loyal fans and collectors can finally bring home a new installment of the ongoing animated saga of TRANSFORMERS as FORTRESS MAXIMUS, SCORPONOK and rest of the Headmasters make their U.S. home entertainment debut in TRANSFORMERS: THE JAPANESE COLLECTION – Headmasters DVD set from Shout! Factory, in collaboration with Hasbro, Inc.

THE TRANSFORMERS – Headmasters is the first part of the rare Japanese trilogy that followed the popular “Generation 1” animated series. Available for the first time in North America, this collectible 4-DVD set features the complete action-packed episodes from the Headmasters series and contains the original Japanese language tracks along with updated English subtitles, a rare art gallery and more! Poised to attract an audience of pop culture enthusiasts, kids and parents who grew up with the American animated series, TRANSFORMERS: The Japanese Collection – Headmasters is priced to own with a suggested retail price of $29.93.

Optimus Prime lives again, the energy of the Matrix has been released and peace reigns on Cybertron . . . but all that is about to change with the startling arrival of the newest breed of Transformers warriors — the Headmasters! Bonus Features Include: