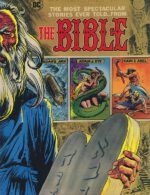 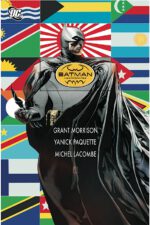 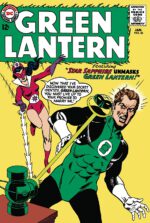 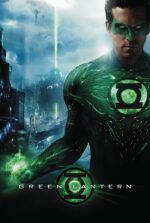 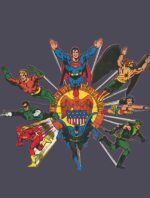 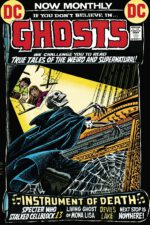 [[[BATMAN: NOEL]]] DELUXE EDITION HC
Written by LEE BERMEJO
Art and cover by LEE BERMEJO
On sale NOVEMBER 2 • 112 pg, FC, 7.0625” x 10.875”,
$22.99 US
Inspired by Charles Dickens’ immortal classic A Christmas Carol, BATMAN: NOEL features different interpretations of The Dark Knight, along with his enemies and allies, in different eras, from writer/artist Lee Bermejo (JOKER).
In this spectacular, oversized graphic novel, Batman must come to terms with his past, present and future as he battles villains from the campy 1960s to dark and brooding menaces of today, while exploring what it means to be the hero that he is.

[[[BATMAN INCORPORATED]]] VOL. 1 DELUXE EDITION HC
Written by GRANT MORRISON
Art by YANICK PAQUETTE, MICHEL LACOMBE and CHRIS BURNHAM
Cover by J.H. WILLIAMS III
The first seven issues of the hot new series are collected in this new, deluxe edition hardcover!
After Bruce Wayne tells the world that he is the financial backer of Batman, he establishes a worldwide franchise of Batmen to protect the entire globe. This is the beginning of a stunning new direction for the world’s greatest detective that will team him with Catwoman, Batwoman and Batman Incorporated representatives on international crimefighting missions against Lord Death Man in Japan, South America and Argentina.
On sale NOVEMBER 30 • 256 pg, FC, 7.0625” x 10.875”, $29.99 US

THE BIBLE HC
Written by SHELDON MAYER • Art by JOE KUBERT and NESTOR REDONDO • Cover by JOE KUBERT
For the first time ever, DC reprints the 1975 comics adaptation of the Bible, featuring the earliest chapters of the book of Genesis, including the stories of The Garden of Eden, the Flood, and Sodom and Gomorrah! Don’t miss this once in a lifetime hardcover edition!
ADVANCE SOLICITED • On sale FEBRUARY 29 • 64 pg, FC, 10” x 13.25”, $29.99 US

[[[ALL-STAR SUPERMAN]]] TP
Written by GRANT MORRISON • Art and cover by FRANK QUITELY
The complete 12-issue run of ALL-STAR SUPERMAN by Morrison and Quitely is collected in a single trade paperback!
Witness the Man of Steel in exciting adventures featuring Lex Luthor, Jimmy Olsen, Lois Lane, Bizarro, and more! Plus: Superman goes toe-to-toe with Bizarro, his oddball twin, and the new character Zibarro, also from the Bizarro planet.
On sale OCTOBER 5 • 304 pg, FC, $29.99 US

[[[BATMAN: THE BLACK MIRROR]]] HC
Written by SCOTT SNYDER
Art by JOCK and FRANCESCO FRANCAVILLA
Cover by JOCK
Don’t miss this epic Batman mystery from Scott Snyder, creator of AMERICAN VAMPIRE, originally published in DETECTIVE COMICS #871-877!
First, in “The Black Mirror,” a series of brutal murders pushes Batman’s detective skills to the limit and forces him to confront one of Gotham City’s oldest evils. Helpless and trapped in the deadly Mirror House, Batman must fight for his life against one of Gotham City’s oldest and most powerful evils!
Then, in a second story called “Hungry City,” the corpse of a killer whale shows up on the floor of one of Gotham City’s foremost banks. The event begins a strange and deadly mystery that will bring Batman face-to-face with the new, terrifying faces of organized crime in Gotham.
On sale NOVEMBER 23 • 288 pg, FC, $29.99 US

[[[BATMAN: THE LONG HALLOWEEN]]] TP NEW EDITION
Written by JEPH LOEB • Art and cover by TIM SALE
From the early days of Batman’s crimefighting career, this new edition of the classic mystery involves a killer who strikes only on holidays. Working with Harvey Dent and Lieutenant Gordon, Batman races to discover who Holiday is! Collected from the original 13-issue series! On sale OCTOBER 5   384 pg, FC, $24.99 US

[[[BATMAN: LIFE AFTER DEATH]]] TP
Written by TONY S. DANIEL • Art by TONY S. DANIEL and SANDU FLOREA • Cover by TONY S. DANIEL
In this new title collecting BATMAN #692-699, Batman searches for a new crime boss calling himself Black Mask – and Gotham City has reached the boiling point. But when pandemonium breaks out at the opening of the new Arkham Asylum, even the combined forces of Oracle, Huntress and Catwoman may not be enough!
On sale OCTOBER 12 • 200 pg, FC, $14.99 US

[[[GREEN LANTERN: WAR OF THE GREEN LANTERNS]]] HC
Written by GEOFF JOHNS, PETER J. TOMASI and TONY BEDARD
Art by DOUG MAHNKE, TYLER KIRKHAM, FERNANDO
PASARIN, CAM SMITH, CHRISTIAN ALAMY and BATT
Cover by IVAN REIS and OCLAIR ALBERT
With the entire Green Lantern Corps against them, the four Earthborn GLs – Hal Jordan, Guy Gardner, Kyle Rayner, John Stewart – make a choice that will rank among the most memorable in GL history. But not all of them agree on what has to be done and what lines can be crossed. Can these warriors overcome their differences in time to save the universe? Find out in this new hardcover collecting GREEN LANTERN #63-66, GREEN LANTERN CORPS #58-60 and GREEN LANTERN: EMERALD WARRIORS #8-10!
On sale NOVEMBER 16 • 240 pg, FC, $29.99 US

[[[TEEN TITANS]]] BY GEOFF JOHNS OMNIBUS VOL. 1 HC
Written by GEOFF JOHNS, BEN RAAB, JAY FAEBER, JUDD WINICK and JEREMY JOHNS
Art by MIKE MCKONE, TOM GRUMMETT, GEORGES JEANTY, DEREC AUCOIN, DREW JOHNSON, IVAN REIS and others
Cover by MIKE MCKONE
Witness the formation of a new team of Teen Titans and their initial battle against an old, familiar foe, Deathstroke, in this hardcover collecting the first fifteen issues of the series from writer Geoff Johns! The reasons behind Deathstroke’s actions prove shocking to the team, and before the teen heroes can get their feet on the ground, they must battle the cult of Brother Blood.
Then, Raven returns with a new body and a new master: the latest Brother Blood! Plus, Deathstroke’s daughter, Rose Wilson, assumes the identity of the Ravager and switches from Titans ally to Titans threat.
Now Deathstroke and Rose hunt for the Titans. Could things get any more explosive? They do, when Kid Flash learns to drive!
This mammoth collection also features TEEN TITANS #1/2, TITANS SECRET FILES #2, TEEN TITANS/OUTSIDERS SECRET FILES 2003, LEGENDS OF THE DC UNIVERSE 80-PAGE GIANT #2 and the four-issue BEAST BOY miniseries!
On sale NOVEMBER 30 • 560 pg, 7.25” x 10.75”, FC, $75.00 US

[[[JUSTICE LEAGUE OF AMERICA ARCHIVES]]] VOL. 10 HC
Written by DENNIS O’NEIL, MIKE FRIEDRICH and ROBERT KANIGHER •
Art by DICK DILLIN and JOE GIELLA • Cover by NEAL ADAMS
In this collection of issues #81-93, the JLA and their Earth-2 counterparts, the Justice Society, must save the Red Tornado. Plus: Solomon Grundy and the timely threats of world hunger and pollution.
ADVANCE SOLICITED • On sale FEBRUARY 29 • 272 pg, FC,
$59.99 US

[[[THE GREEN LANTERN OMNIBUS]]] VOL. 2 HC
Written by JOHN BROOME and GARDNER FOX • Art by GIL KANE, JOE GIELLA and SID GREENE • Cover by GIL KANE and MURPHY ANDERSON
A second massive collection of GL epics from issues #22-45! As Hal Jordan becomes a master of his power ring, he faces off against some of his most classic and deadliest foes, including Sinestro, Star Sapphire, Sonar, the Shark and the Tattooed Man.
On sale NOVEMBER 23 • 624 pg, FC, 7.0625” x 10.875”, $75.00 US

[[[SUPERMAN: NIGHTWING AND FLAMEBIRD]]] VOL. 2 TP
Written by GREG RUCKA, JAMES ROBINSON and ERIC TRAUTMANN
Art by PERE PEREZ and BIT • Cover by ALEX GARNER
Following the startling events of “New Krypton,” the only thing standing between Earth and impending doom are the all-new Nightwing and Flamebird! Collected from ACTION COMICS #883-889!
On sale OCTOBER 12 • 208 pg, FC, $17.99 US

[[[SUICIDE SQUAD: THE NIGHTSHADE ODYSSEY]]] TP
Written by JOHN OSTRANDER, KEITH GIFFEN and J.M. DEMATTEIS • Art by LUKE MCDONNELL, KEITH GIFFEN and others • Cover by JERRY BINGHAM
In these stories from issues #7-12, the Squad is trapped in Russia. And before they escape, they’ll have to fight The People’s Heroes. Then, Batman discovers the existence of the Suicide Squad – and he’s not happy. Plus: a crossover from JUSTICE LEAGUE INTERNATIONAL #13.
On sale OCTOBER 19 • 224 pg, FC, $19.99 US

[[[GOTHAM CENTRAL BOOK 3: ON THE FREAK BEAT]]] TP
Written by GREG RUCKA and ED BRUBAKER • Art by MICHAEL LARK, JASON ALEXANDER and others • Cover by MICHAEL LARK
Renee Montoya travels to Keystone City to learn the truth about a fellow officer’s strange mutation in these stories from issues #23-31. Plus, what is the meaning of the dead Robin, The Boy Wonder?
On sale OCTOBER 12 • 224 pg, FC, $19.99 US

[[[ASTRO CITY: DARK AGE TWO – BROTHERS IN ARMS]]] TP
Written by KURT BUSIEK • Art by BRENT ANDERSON • Cover by ALEX ROSS
In the concluding volume of THE DARK AGE, collecting BOOK 3 #1-4 and BOOK 4 #1-4, two brothers, one good and one evil, must deal with family secrets and social upheaval, involving heroes from Jack-In-the-Box to the Blue Knight and the final fate of the mysterious Silver Agent
On sale OCTOBER 26 • 240 pg, FC, $19.99 US

[[[ZATANNA: SHADES OF THE PAST]]] TP
Written by PAUL DINI and ADAM BEECHEN • Art by CHAD HARDIN, JAMAL IGLE, CLIFF CHIANG and others • Cover by ADAM HUGHES
Everybody’s got that one thing that just creeps them out beyond all reason. For Zatanna, it’s puppets: ”Creepy, horrible, soul-sucking puppets.” Find out why she’s scared of little wooden men in cheap suits in these stories from issues #7-12!
On sale OCTOBER 5 • 144 pg, FC, $19.99 US

[[[VICTORIAN UNDEAD II: SHERLOCK HOLMES VS. DRACULA]]] TP
Written by IAN EDGINTON • Art by DAVIDE FABBRI
Cover by RYAN SOOK
Collected from the six-issue miniseries! A year after the defeat of Professor Moriarty’s horde and the fire-bombing of London, restoration is well under way. Yet, from across the sea, ancient eyes cast their hungry gaze upon the still vulnerable capital…Dracula is coming.
On sale OCTOBER 12 • 160 pg, FC, $14.99 US

[[[SHOWCASE PRESENTS: GHOSTS]]] VOL. 1 TP
Written by VARIOUS • Art by VARIOUS • Cover by NICK CARDY
From the 1970s comes this value-priced collection of classic ghost stories, featuring stories like:
• “Ghost in the Iron Coffin”
• “The Tattooed Terror”
• “Death Held the Lantern High”
• “The Dark Goddess of Doom”
• “The Haunted Hero of Saint Helena”
• “The Screaming Skulls”
On sale OCTOBER 5 • 512 pg, B&W, $19.99 US