MOONSTONE BRINGS MYSTERY, NOIR, AND COOL BACK
WITH ANGELTOWN COLLECTION!
Moonstone Entertainment, Inc., known for innovative books and comics starring classic as well as original characters, sets the standard once more for the Private Investigator story with its release of ANGELTOWN: THE NATE HOLLIS INVESTIGATIONS written by Gary Phillips, Interiors by Shawn Martinbrough, Cover by Michael Stribling.

Los Angeles is the birthplace of noir because the brighter the sunshine, the deeper the shadows and the more deadly the mischief that goes on in the dark.

Angeltown: The Nate Hollis Investigations is a hardcover from Moonstone reprinting the Vertigo mini series in glorious black and white — the original critically praised sequential mystery featuring the cool, tough private eye’s frenzied search in the shadows for a pro hoopster wanted for murder in “Baller.”

The brand of noir that encompasses private eye tales is all about style and gritty substance. Phillips tells a hard hitting story with rapid fire dialogue and staccato pacing. Martinbrough adds to the fist to the face this story gives the reader with both stark and subtle imagery. Between them, the original mini series set a new standard for PI Noir.
Exclusive to this hardcover, Gary Phillips (Operator 5), raises the bar once more with two original illustrated prose short stories; “Hollywood Killer,” wherein superhero pretenders prowling Hollywood Boulevard for tips are getting bumped off, art by Manoel Magalhães (Vincent Price Presents, Bluewater Comics) and “King Cow,” about cattle, low-riders and babes with nazi tattoos, art by Alejandro Aragon (28 Days Later, Boom Studios). 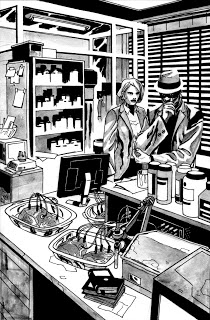 Slick as spit, big-shouldered Hollis walks the walk and talks the talk in the Angeltown comics, taking on a star-studded scandal that could rip the roof off post-Rodney King L.A.—
Kevin Burton Smith, Mystery Scene
Anyone who has read his Monk series knows Gary Phillips can write great PI stories. Well as it turns out he is also quite adept at using the comics/ graphic novel medium as well. With Angel Town Phillips has introduced us to a new PI character, Nate Hollis, set in L.A. and ready to kick ass and take names. — Jon Jordan, Crimespree magazine
Gritty.  Sordid.  Dark.  Hard boiled.  And all cast against the canvas of the Land of Broken Dreams.  Angeltown: The Nate Hollis Investigations is that and so much more and it’s all from Moonstone!
STAY TUNED TO ALL PULP FOR PREVIEW PAGES FROM
ANGELTOWN! 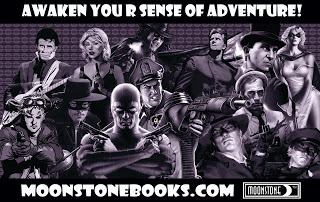