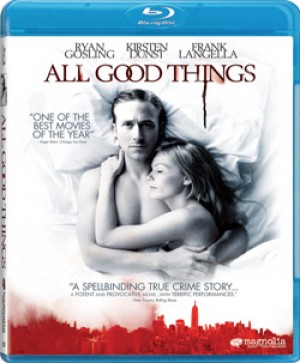 Kirsten Dunst is a strong actress in need of a breakthrough part to live up to the promise she showed in her earlier work. [[[All Good Things]]] should have been that production, but the troubled film, out on Blu-ray this week from Magnolia Home Entertainment, failed her and the audience thanks to director Andrew Jarecki staying on the surface throughout the story of a marriage gone wrong. Jarecki is a documentarian best known for [[[Capturing the Friedmans]]] and he intended this movie to be based on the true life story of Robert and Kathleen Durst.

Robert Durst was the second son of the powerful Seymour Durst who ran the Durst Organization, which own lucrative, if shady, real estate in Times Square. In fact, the film suggests the Dursts were the reason the center of midtown remained squalid for so long was because they were resistant to change, butting heads with City Hall. Durst married dental hygienist Kathleen when she was just 19 and knew little about her husband’s tortured past. In 1982, she vanished and the manhunt sent Robert running. He has been implicated in several killings and his clear psychological issues made ripe fodder for a storyteller.

Marcus Hinchey and Marc Smerling wrote a screenplay based on the romance, marriage, and disappearance, cleverly told through flashbacks during Durst’s trial testimony. Dunst was the first actor to sign on and then Ryan Gosling was added to play Durst. As work began, both felt constrained by the facts so Jarecki changed all the names and let things loose. One of the results was a story that remained compelling but was also disquieting. Durst became David Marks but once he ran, and hid in drag, living in Texas, pretending to be mute things could have easily gone off the rails, but Gosling’s strong performance anchors the tortured character.

Jarecki told [[[The New York Times]]] that his job was “to portray these people as human beings, and that’s very hard to do when you’re living in a world where Robert, for example, has been painted as a burlesque figure in the media.”

Unfolding over more than thirty years, the movie does not do a good job of filling in the blanks as it skips through the years. On the night David forces Katie/Kathleen to have an abortion, she first snorts cocaine, setting up a possible sub-lot that is never fully revisited. Friendships come and go, her family remains a group of cyphers while David’s controlling father, well played by Frank Langella, and controlling brother (Michael Esper) are one-dimensional antagonists.

This could easily have been a showcase for Dunst whose Katie clearly falls in love with David from the moment they meet and remains mystified at the demons that clearly torture the man. He never reveals anything about himself or explains his explosive behavior, so what little she and the audience learn comes from others. As a result, we have some sympathy for David who watched her mother jump from their mansion roof to her death and never spoke of it.

Shot in muted colors with an eye for period detail, the movie should have offered more to both its actors and its audience. Watching the 1:41 production, it left you feeling empty and dissatisfied, not entirely knowing what to believe.

The Blu-ray comes chockfull of extras including a nice piece, “All Good Things: Truth in Fiction” showing the true events that shaped the production (the real Durst watched part of the filming and told the [[[Times]]] he liked the film even if he may dispute some of its conclusions). There are deleted scenes of some worth and an interesting commentary by Jarecki and Durst. A second commentary is also available with Jarecki, Hinchey, and Smerling. Less interesting is the piece on the aging makeup used on Gosling.