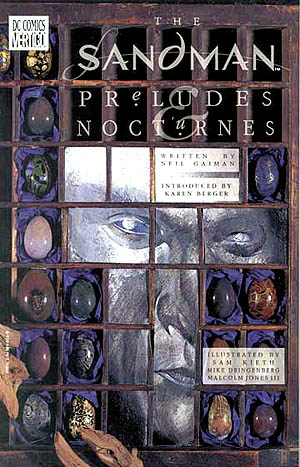 Though a film adaptation hasn’t come to be (and based on the scripts kicking around, that’s a good thing) last September brought word that Neil Gaiman’s  comic book series The Sandman might head to television in the form of a series from Warner Bros. and Supernatural creator Eric Kripke. But at a PaleyFest red carpet event, Kripke had some disappointing news, telling The Live Feed:

“Unfortunately, for a lot of varying reasons, Sandman is not in the works, at least for this season.” He elaborated that the potential adaptation “just didn’t quite happen this season through nobody’s fault, and hopefully we can do it again in the future.”

DC and Warner Bros. would love to see it happen, as doing it right could easily kick off a franchise of films or a long running TV series. The holdup, to me, seems to be just pulling all the players together at the right time.

Or if Neil’s old statement is still true…

“I’m growing vats of people like you all around the world. Eventually we’ll put a bunch of you in a room with knives, and whoever emerges alive will be the winner and can make the Sandman movie.”

…they may just be waiting for a big enough auditorium.

Oh, and since today is March 15th, we even have a relevant image from The Sandman: Preludes And Nocturnes for the day: