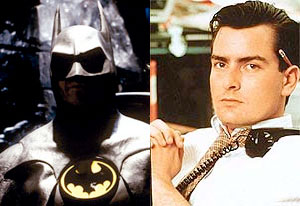 There was a time when Charlie Sheen wasn’t a crazed obsessive with a penchant for terrorizing people around him while avoiding the law, but only acted the part. Perhaps this is why, once upon a time, he was strongly considered for the Caped Crusader.

Harlan Ellison was an occasional film critic back in the ’80s with his column Harlan Ellison’s Watching, which ran in Cinema magazine, the Los Angeles Free Press, Starlog magazine, and The Magazine of Fantasy and Science Fiction, where he would leverage his knowledge of Hollywood to bring additional depth to his own commentary. And while writing his review of Batman in the October 1989 issue of The Magazine of Fantasy and Science Fiction (“Installment 36, In Which, Darkly and Deliciously, We Travel From Metropolis to Metropolis, Two Different Cities, Both Ominous”) he revealed that at one time Charlie Sheen was up for the role of Bruce Wayne/Batman, and didn’t get only because he was too young– he would have been 23 at the time of shooting.

Now, Charlie Sheen was obviously a capable actor then, as audiences saw in Platoon, Wall Street, and Eight Men Out. And he certainly could handle the physical aspects; he would soon start shooting Navy Seals. But this is the way of Hollywood, and he went on to other, shall we say, winning projects.

Still, he could still be associated with Batman–  now he’s about the right age now to play the Riddler in The Dark Knight Rises. That could be a big draw for Warner Bros., who will probably need the revenue since they just lost the star of their biggest TV show, Two And A Half Men…

Thanks to Doug Lane and Barney Dannelke for research.