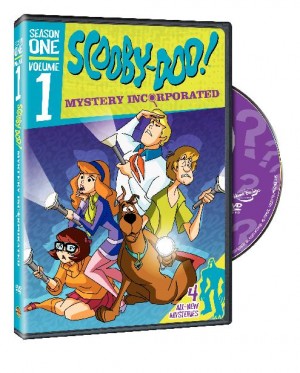 Could the eleventh time be the charm? I stopped watching Saturday morning cartoons right around the time Scooby-Doo solved his first mystery. To my mind, it was also a show from my younger brother’s era. At the time, I thought it looked and sounded pretty stupid, an opinion I maintained ever since.

Last year, I was forced to re-examine those feelings when I was invited to write a few Scooby-Doo stories for DC Comics’ print incarnation. I talked with longtime fans and other writers in addition to reading a ton of stories. The formula had its charm and the characters diverse enough to hang stories on but I couldn’t imagine things like their family lives or the unlikely coincidence of all four being only children.

I apparently was not the only one with those questions, and Warner Bros. Animation has offered up a new series, Scooby-Doo! Mystery Incorporated which debuted in July. In late January, the first four episodes from the fourteen episode first season were released on DVD by Warner Home Video.

The formula remains the same. People get spooked by something, the kids investigate, wackiness ensues, and the monster is revealed to be someone in disguise who would have gotten away with the scheme du jour “if it wasn’t for those darn kids”. What’s different this time, though, is the introduction of a Big Bad, someone calling himself Mr. E (Mystery, get it? They owe Bob Rozakis a royalty), who is teasing Mystery, Inc. with clues to a some big mystery surrounding Crystal Cove. The mystery relates to the town’s history and involves a quartet of teen sleuths and their pet, and is being slowly unfolded so you don’t get a resolution to this in disc one (or disc two, due in March).  Heck, you only get two clues this time around.

The mysteries themselves are a little more gruesome than the 1970s or 1980s stories, such as The Slime Mutant in the opener, “Beware the Beast From Below”. You still get alligator people and ghost trucks and the Man Crab.

In addition to the kids, we now meet their parents and siblings and there’s some overall character development. In addition to Fred and Daphne’s obvious romance, there’s Velma who has gotten luckier with Shaggy, who wants to keep their romance a secret. Shaggy even keeps the secret from Scooby, which irks Velma, who is now coming off smarter and geekier than ever before. One episode places Daphne in a bikini and has the characters remark on her sexiness, which is also something new.

They are clearly established in Crystal Cove, the “Most Hauntedest Place on Earth”, with Fredrick “Fred” Jones, Jr.’s father the local mayor. Daphne Blake’s oblivious parents are a status seeking wealthy pair seeking to marry her off in their own social class. She also has a gaggle of mindless siblings. None of the parents approve of their mystery-solving extracurricular activities but yet the foursome continues to go out and expose crimes and problems the local Sheriff seems unable to handle. Apparently, animation for kids means adults lose half their IQs regardless of when the show is produced.

The new modified designs for the characters adds some angles to Hanna-Barbera rounded lines which I find a detriment but restores them to their 1969 original outfits, complete with ascot. Vocally, Matthew Lillard reprises his live action role as Shaggy with the originator, the immortal Casey Kasem, now voicing his dad, Colton. Facts of Life’s Mindy Cohn now handles Velma, Grey DeLisle is Daphne, and the irreplaceable Frank Welker handles Fred and Scooby. Among the new characters, veteran character actor Gary Cole is Mayor Fredrick Jones, Sr. and Patrick Warburton is Sheriff Bronson Stone with comedian Lewis Black as Mr. E.

The new direction and more sophisticated story gussy up the tired formula and make the show slightly more entertaining to watch but this remains, at best, kids’ fare. The DVD comes with no extras so the only reason to own this is if you missed the endless reruns on the Cartoon Network.