MOONSTONE MONDAY-AND NEXT UP, A GREEN HORNET REVIEW FROM THE OTHER SIDE! 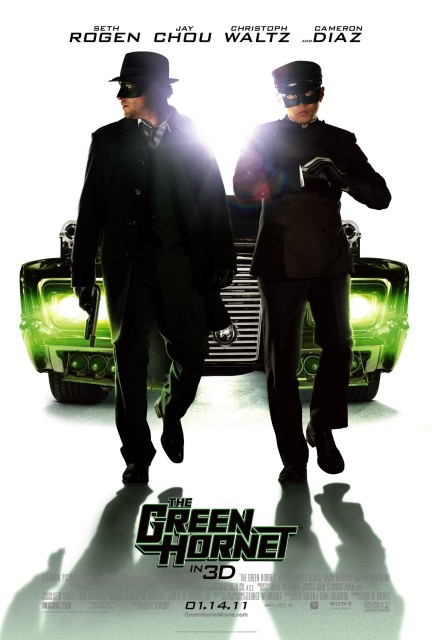 1) My predominant thought as I suffered through this movie was, “And they passed on the Kevin script (which was played out over ten issues of Dynamic’s Green Hornet comic) for this?

2) …and don’t get me wrong: the problem here is not Seth Rogen’s performance (which is pretty wretched, truth be told), but the script by Rogen and Evan Goldberg that asks us to treat an absolute jerk as a hero that never has anything close to a moment that redeems him.

3) Jay Chou seems to have walked into this train wreck from another film–you know, one which treats its subject seriously and has things like pace, tone and clear storytelling that this film doesn’t. Hell, he even sings a rap song in his own language over the closing credits that’s five time more entertaining than anything we’ve just endured.

4) Nothing makes Cameron Diaz look so out of place as ‘the hot chick’ than putting her in the same room as two men who, quite frankly, look like fetuses next to her and have them alternate between slobbering over how hot she is and pointing out how much older she is. And the way she is shot makes her look like their mother.

5) Welcome, Chritoph Waltz, to that rarified club for actors and actresses who won an Academy Award, and then followed that performance up with an embarassment…an embarassment made all the more sad by the fact that what he’s doing is a variation, emotionally, of Colonel Blanda. At least they came up with a cool visual for his ultimate villianous self–although even that is blunted by Waltz prancing around shouting ‘I’m ungassable!’

7) When are people going to realize that pointing out the flaws in your film in dialogue (“Boy, your romantic lead is old!”, “Hey, the name ‘Bloodnofsky is stupid”, “Hey, why do you suddenly like your dad when all this time you thought he was a dick?”) only holds up those flaws and shakes them at the audience?

8) Some of director Michel Gondry’s legendary quirkiness does bleed through all the by-the-numbers action/adventure filmmaking…and almost every time it serves to confuse the viewer–with the exception of the moment he uses split screen technology in a sequence where….grumblemutter…Bloodnofsky’s men spread word of a bounty on the Green Hornet’s head.

9) By eliminating the Legacy aspect of the Green Hornet, it makes all the drawing of Bruce Lee and photos of The Lone Ranger cyphers. Furthermore, by pushing Britt’s father into the deep background save for a puzzling cameo in a dream sequence in the middle of a sushi restaurant, it destroys that moment where Britt realizes what a hero his father was.

10) Okay….if you establish very, very early on that Kato has an affinity for both classical music and vinyl records, why do you refrain from giving us ‘The Flight of The Bumblebee’ save for a joke sting towards the end? For that matter, why do you wait until the very last minute to give us the weird-ass green psychedelic lights that were a signature of the 60’s television series.

In short…a truly awful, mismanaged film that falls frequently on what it wants to do. But given that this year will bring us other super-hero films like Thor (whose trailer preceded the film) will prolly erase its memory before long.