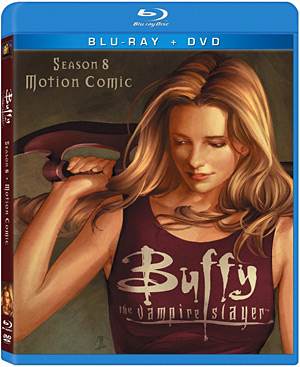 Buffy the Vampire Slayer]]] never was a ratings darling but it caught the cultural zeitgeist and was an important factor in pop culture during its seven season run (1997-2003). Thankfully, when the series ended, showrunner Joss Whedon felt the characters weren’t done yet and agreed to continue their story in the pages of the Dark Horse comic. Dubbed Season Eight, the 40 issue run completes its run this month with a ninth season on tap.

20th Century Fox Home Entertainment decided to capitalize on the interest by hiring a company to turn the comics into motion comics but stopped after 19 issues. Available through Amazon Video on Demand and iTunes since July, they generated minimal buzz. They have now been collected on disc and is available as a combo pack (Blu-ray and DVD).

The reason there was so little said about them is that they are pretty mediocre, more reminiscent of the Lawrence Gantry Marvel cartoons of the 1960s than the [[[Watchmen]]] motion comics that are technically far superior. First of all, the characters barely move and speak without any attempt to animate their mouths. CGI-added effects don’t mix well with the blow-ups of Georges Jeanty’s excellent art.

The vocal casting is terrible as no attempt is made to come close to the characters as we’ve come to recognize them. I don’t recognize any of the names in the credits and they probably were hired on the cheap, much like the animation. As a result, the superb scripting from Whedon, Jane Espenson, Bran K. Vaughn, and Drew Goddard is spoiled.

Interestingly, the cinematic dissolves and smash cuts between scenes in the comic, which work well in a static medium, feel jarring and disjointed when animated. Again no effort has been made to smooth over transitions but merely imitate the comic without considering how to adapt from one medium to another. Each issue is adapted in about 11 minute installments and all the art and dialogue are present so the story progresses through the first half of the season. We get new threats, old friends, and a nice mix of humor and high drama as we explore a world with all the slayers active.

Buffy remains front and center with Willow and Xander as her lieutenants but poor Dawn has issues of her own that keep her from being anything but a distraction (and comic relief). Of the 1800 slayers now active, some 500 work directly for Buffy, broken into teams of 10 and under Xander’s one watchful eye. At the time, much was made of Buffy’s one-night stand with Satsu, but Jane Espenson expressed surprise since doing the unexpected is one of the hallmarks of the series. Sarah Michelle Gellar also approved of the character development so let’s move on.

The DVD release comes complete with limited edition Jo Chen packaging and a reprint of the issue. There are minimal extras including five minutes shot at this past summer’s comic-con as Jane Espenson, Jo Chen, John Cassady and some fans natter on about the show’s impact and how cool the comic continuation is (which is absolutely accurate). And now you need the comics to find out what happens since the nineteenth and final motion comics leaves many unresolved threads.