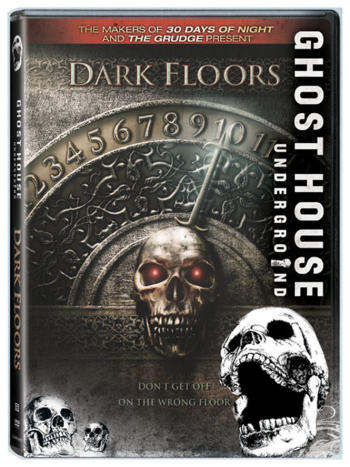 A father, concerned for his autistic daughter’s health, sees her immediate removal from the hospital as her only option. An elevator break-down prevents a smooth exit and renders them trapped with others. This is only the beginning of their descent into hell. When the doors finally open, the hospital appears mysteriously deserted. As mutilated bodies are found, creatures from a dark world start a frightening attack. It soon becomes clear that the survival of the group may rest solely on the little girl.

The one thing that needs to be known before watching [[[Dark Floors]]] is that this film is primarily a showcase for the Finnish metal band Lordi. Those unfamiliar with the band should consider them like Rob Zombie meets [[[GWAR]]]. The international subtitle for the film is even “[[[The Lordi Motion Picture]]]”. The band, along with the leader Mr. Lordi, came up with the idea for the film, and star as all of the “monsters” in the film (in quotes because if you see a picture of the band, you know that this is what they normally look like, professional makeup and all). The members of the band are essentially playing themselves in the film. This film is to the members of Lordi like Moonwalker is to Michael Jackson, without anybody turning into a car. Sadly, this is probably the coolest part of the film. The plot takes itself a little too seriously, and with a weak and confusing resolution at the end, it really should have just been about the band members.

The effects are pretty well done, and just about on-par with a music video, which makes sense, seeing as how the director has also directed all of Lordi’s videos. The film is currently the most expensive movie made in Finland, weighing in at 300,000 Euros (which is about $390k). The monster makeup is great, but if you ever seen images of the band itself, this is pretty much how they look 24/7. Not knowing that the film is about the band makes for a confusing ride. You’ll find yourself asking why the monster has a goatee and dressed like Meatloaf circa 1984.

Being written by a Finnish metal band and directed by a Finnish director makes it pretty hard to take place in the United States. The leads of Noah Huntley ([[[28 Days Later]) and Dominique McElligott are both from the UK and they begin to lose their American accent about halfway through the film. The brooding band members do a great job brooding and Skye Bennett does a great job as the precognitive-but-creepy little girl, Sarah. 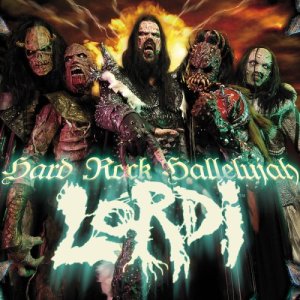 The fact that the film takes itself serious while the primary antagonists are members of a metal band should show how campy the movie is overall. If you are in on the joke of this film, it can be pretty funny, like “Hey look, the guitarist is chasing that lady down a hallway, he must be terrible!”. So beware: if you watch this film without that knowledge, you may fall into the trap of taking it too seriously.

Overall, the film looks gorgeous and will keep you entertained with a “time loop” plot twist. Though the main plot comes off as a little pretentious, the fact is that this is essentially from the mind of a Finnish metal band about the characters they portray, so you’ll be scared as much as you’d laugh if it where the Hall & Oats chasing you around an abandoned hospital.