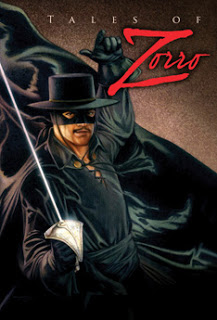 This doesn’t have to do with Moonstone, you say??   Well, you’d be wrong.  Although Moonstone has no ties to the series necessarily, Moonstone has printed TALES OF ZORRO, an anthology of swashbuckling tales of the Swordsman! http://www.moonstonebooks.com/

All 88 Episodes of the Fan-Favorite Series – Not Seen Since Their Family Channel Airing in the Early `90s – Finally Arrive in an Extras Laden Collection, Featuring The Original, Swashbuckling Douglas Fairbanks Film, The Mark of Zorro, Chapter 1 of the 1939 Theatrical Serial, Zorro’s Fighting Legion, Never-Before-Seen Footage from the TV Series and Much, Much More!

NEW YORK, NY — “Out of the night a hero must rise with courage that even a mask can’t disguise!” So begins the celebrated adventures of Zorro — swordsman, scientist and relentless defender of the oppressed. Beginning in 1919, with the publication of Johnston McCulley’s story, “The Curse of Capistrano”, the legend of Zorro was further cemented a year later when Douglas Fairbanks and Mary Pickford produced The Mark of Zorro — with Fairbanks as the title character — as the inaugural film for United Artists. Since then, the swashbuckling hero has inspired more than 40 films and nearly a dozen TV series – one of which has been eagerly awaited by legions of fans for years. And, this January, the wait ends as A&E Home Entertainment unleashes ZORRO: THE COMPLETE SERIES in a heroic collector’s set!

Filmed entirely in Madrid, Spain, ZORRO aired on The Family Channel for four seasons, from 1990-1993, and, for the very first time, this spectacular DVD MegaSet™ collects all 88 episodes from the classic ’90s series that brought Zorro to life for a whole new generation of fans. The legend of Zorro begins in the early 1800’s, when Los Angeles was a dusty pueblo, the farthest colonial outpost of the Spanish empire. This wild and untamed land was governed by the Alcalde, a corrupt mayor whose word was law and whose law was absolute. Young and dashing Don Diego de la Vega (Duncan Regehr, Monster Squad), pretending to care only for science and study, secretly creates a bold alter-ego: Zorro — the Fox. And aided by his mute servant Felipe, inspired by the faith of the beautiful tavern-keeper Victoria, and carried into battle by the mighty steed Toronado, the masked crusader thwarts the Alcalde’s plots at every turn. With his trademark whip and sword, he is everywhere and nowhere, quick to defend the innocent and attack the guilty. And he always leaves his trademark symbol ‘Z,’ — the mark of Zorro!

Aside from the 88 remastered episodes on 14 DVDs, ZORRO: THE COMPLETE SERIES also features an exclusive bonus disc presenting some of the masked defender’s most influential appearances as well as rare behind-the-scenes material from the 1990 series. Included is “The Mark of Zorro” starring Douglas Fairbanks — the original, full-length silent film that defined the “swashbuckler” genre; Chapter 1 of the 1939 theatrical serial, Zorro’s Fighting Legion; trailers for the serials Zorro’s Fighting Legion, Zorro’s Black Whip and Zorro Rides Again ; the original, never-before-released pilot for the “New World Zorro” and a photo gallery from “New World Zorro”.

Don’t miss out on this fan favorite TV classic in which villains always learn that crime doesn’t pay and that the people of Los Angeles can always count on “one who’s larger than life and defender of all. He’s the one who strikes back for the poor and oppressed. A hero . . . whose name is Zorro!”