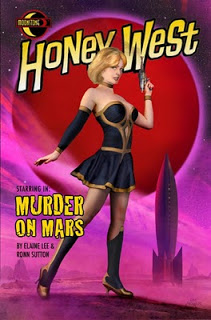 Honey West is a character that I only know from the 1960’s television show starring Anne Francis.  But then again, being male, I didn’t need much.  Thanks to the corrupting influence of my father (Thanks, Dad!) I quickly became hooked on reruns of the show.  I never read any of the books but my understanding is that they’re a whole lot racier and sexier than the TV show.
Moonstone’s HONEY WEST series would appear to be following the original print incarnation rather than the TV version.  Honey doesn’t use any of the James Bond inspired gadgets she used in her TV series.  In fact, Honey uses the standard equipment just about any other private eye of the same period would use: a gun, brains, guts and sex.
Issue #3 is my first exposure to Moonstone’s series and while I wasn’t disappointed with what I read I also wasn’t jumping up and down with boundless excitement.  Honey is hired anonymously to figure out who killed the lead actress in a Grade C science fiction movie.  She thinks the job stinks like houseguests who won’t leave but she takes the job and hires on as an extra.  And that’s when the story gets cooking.
It’s not an elaborate set-up for a story.  But then again, how much do you need for a private eye story?  There’s a dead body, there’s suspects and there’s a mysterious someone who wants Our Heroine to discover the truth.  Bing bang boom.
The suspects we’re given are such a self-absorbed lot that I find it difficult to imagine that any one of them could have taken attention off of themselves long enough to even contemplate attempting to murder somebody much less carry it out.  Honey is soon up to her beauty mark in sifting through the various motives of the suspects even if they seemed kinda thin to me.
The artwork didn’t excite me but I do appreciate that it does what artwork in a comic book is supposed to do: tell me what’s happening, who’s doing what and why and to whom.  I also got the feeling that the artwork was attempting to evoke the feel of how the art in a comic book of that period would look.
So should you read HONEY WEST #3?  If you’ve read #1 and #2 I see no reason why you should stop now.  I’m certainly going to come back for #4 to see how the mystery gets solved but as to whether I’m going to continue reading the title…that’s a mystery that will wait to be solved depending on the story and art in future issues.
Share